This landscape character type occurs in eastern Suffolk on the indented edge of the central clay plateau. The rivers draining east and south have divided the edge of the plateau into a series of ‘fingers’ and this landscape is found on those residual areas of plateau. These interfluves run in a series from the Hundred  River and the River Brett.

The dissected plateau is composed of glacial till or boulder clay left behind by the ice-sheet of the great Anglian Glaciation.  The flatter parts have heavy, poorly-drained clay soils such as the Beccles series, but on the more undulating edges there are some better drained soils such as the Hanslope series.

The enclosure pattern is generally ancient and organic in appearance. However, where the estate influence is stronger, as around Helmingham, 18th and 19th century rationalisation changed the field pattern into more easily managed units with straighter boundaries. The fields are medium to large and the hedges vary from large with a mix of trees and shrubs to single-species hedges that are more tightly controlled. The introduction of clay pipes for under-drainage in the late 18th century, coinciding with an upswing in grain prices, meant that a lot of pasture was converted to arable during the 19th century.

Some of the flatter, poorly-drained interfluves were used for large common pastures, eg Sotterley Common, Frostenden Green and Clay Common, Otley Green, Crowfield Green, Barham Green etc. Many of these were enclosed in the 18th and early 19th centuries and only their outlines survive as landscape features. Other interfluves were used for medieval and Tudor deer parks, eg. Kelsale Park, Helmingham Park and Glemham Park. Later landscape parks occur at Coddenham, Heveningham, Easton and Benacre.

In the 20th century the flat landscape at Halesworth, Leiston, Parham, Debach and Raydon was utilised for World War II airfields. At all those places the wartime use has left a legacy of runway remains and buildings, and some have been converted to modern industrial use.

The settlement pattern consists of occasional villages and numerous dispersed hamlets and farmsteads. Many of the farmsteads are medieval in origin and some are surrounded by moats. The vernacular buildings consist of timber-framed structures interspersed with brick ones, though the brick appearance is frequently just a façade added to an earlier timber frame. Roofs of flat peg-tiles or curved peg-tiles are common. In a few places the estate character is very strong, as at Helmingham, where there are numerous estate cottages in a very distinctive 19th century style.

Blocks of ancient semi-natural woodland are scattered throughout the area, made up of oak, ash, field maple, hornbeam and small-leaved lime. Hedgerow trees are ubiquitous and in many places this landscape can feel well wooded

Despite the reasonably well-wooded landscape the plateau landform means that the views are open and can be long. However, the comprehensive network of winding lanes and tall hedges means that other areas can be much more intimate.

These landscapes are subject to considerable change which is promoted by their relationship to the A12 trunk road and the creation of airfields in the 1940’s. There is considerable intrusion of suburbanisation with horse paddocks, barn conversions and ranch-style fencing. As on other parts of the plateau claylands, industrial agricultural buildings make a significant impact, especially where there is inadequate screening. 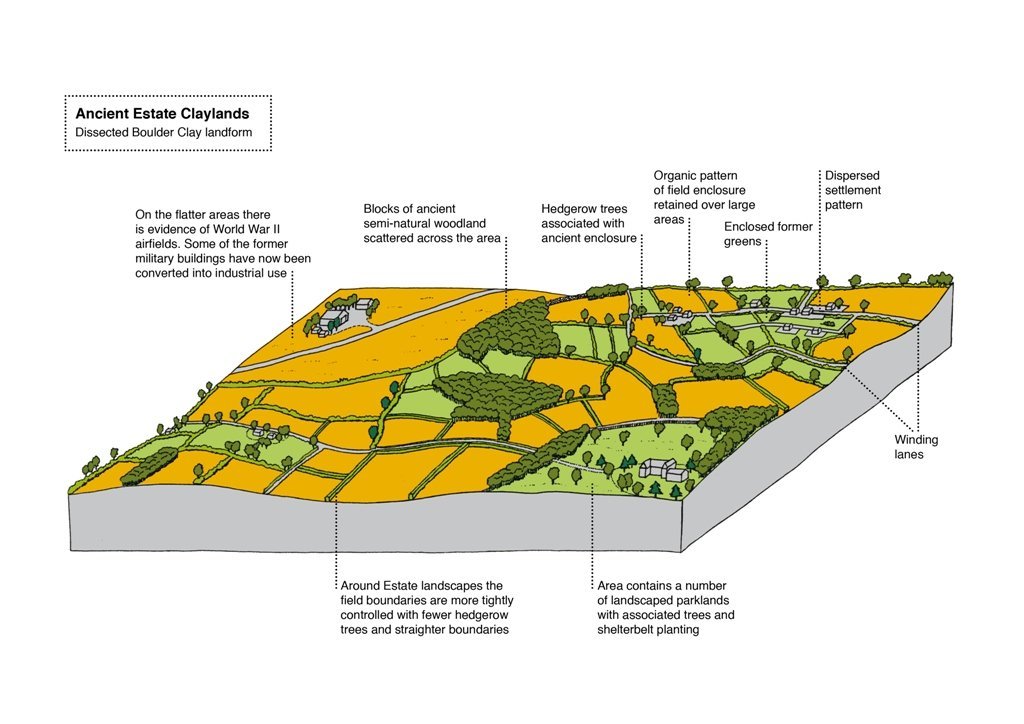