This landscape character type occurs in three areas of the county :

To the south of the Gipping valley from Combs southward to Wattisham, Barking,   Nettlestead, Elmsett, Hintlesham and the eastern side of Hadleigh.

To the north side of the Gipping valley in an arc on the north-east edge of the central clay plateau northwards and westwards from Creeting St Peter and Stowupland through to Haughley, Elmswell, Walsham-le-Willows, Hepworth and Barningham, and then eastward to Wattisfield, Wortham, Mellis, Burgate and the western side of Eye in the Dove valley.

At the north-west end of the plateau, from South Elmham St Cross eastward through the Ilketshalls to Carlton Colville.

This landscape occurs towards the edges of the great plateau of glacial till or boulder clay deposited by the retreating ice-sheet of the Anglian Glaciation around 430,000 years ago.
The top of the plateau is generally flat or only gently undulating, but towards the edges stream action has made it more dissected with greater and more complex slopes. To the south of the Gipping the dissection is more prevalent and the interfluvial plateaux are thin, but to the north of the Gipping the areas of slope are much narrower and the plateaux greater. The differing topography on either side of the Gipping is reflected in their differing soils: to the north it is mainly the heavy, seasonally-waterlogged soils of the Beccles 1 association on the plateaux, with small areas of better Ashley and Burlingham 3 soils on the slopes, while to the south it is the slightly better Beccles 3 soils on the plateaux with good Hanslope soils on the slopes.

The northern area shows some evidence of former areas of subdivided common fields on the better-drained land and this ‘common-field’ character grows stronger towards the western edge. Most of these common fields were enclosed piecemeal before the 18th century and lack the strong geometric character of the late-enclosed areas further to the west. The removal of hedges to amalgamate fields in order to accommodate the large machines of modern arable farming has greatly weakened the earlier field patterns leading, in some places, to the creation of very open ‘prairie’ landscapes.

The poorly-drained clay plateaux are covered with numerous extant or former greens and commons. These range in size from the small triangular greens at road junctions, as at the former Cross Green in Old Newton (2.3 acres or 0.9 ha) to the very large Button Haugh Green (around 450 acres or 180 ha when it was enclosed in 1814) which extended over parts of four parishes – Great Ashfield, Elmswell, Hunston and Norton. The largest greens lay on the more extensive plateaux to the north of the Gipping and the two largest surviving greens in Suffolk – Mellis Green (218 acres or 88ha) and Wortham Long Green (102 acres or 41ha) – are both in this area. To the south of the Gipping the greens are noticeably thinner and smaller, reflecting the narrower plateaux – Battisford Tye, at 157 acres (64 ha) was the largest before its enclosure in 1810. The term ‘tye’ for a green is an indicator of the cultural differences between the lands on either side of the ‘Gipping Divide’. Tyes are numerous to the south (eg. Barking Tye, Charles Tye, Willisham Tye, Nedging Tye etc) but the only known example north of the Gipping (but under a mile north) is Thorney Green in Stowupland, which was called Thorney tye in 1446.

In landscape terms, the larger greens usually lie on the heaviest land with the poorest drainage and the lowest potential for arable farming. The greens seem to be the result of expansion into former marginal or ‘waste’ areas in the 12th or 13th centuries, and this is reflected sometimes, as at Button Haugh Green, by the green being shared by several adjacent communities. The evidence suggests that these greens evolved through prolonged grazing from areas of woodland or wood pasture documented in the Domesday Book. Button Haugh Green is an example – ‘haugh’ is frequently used in East Anglia to denote woodland, yet the land was already described as a ‘pasture’ by the late 12th century and a map of 1627 shows it being grazed by flocks of sheep.

The enclosure of the large greens has left a very distinct landscape with very straight ‘surveyors’ roads running through the centres of the former greens, with straight boundaries, often quickthorn hedges, running from them to the sinous and more substantial old green edge. The older timber-framed farmhouses are set back along the old edge, while post-enclosure brick buildings line the new roads. The flat areas of former greens were sometimes used for WWII airfields, as at Ellough Moor (Beccles Airfield), Brome Common (Eye Airfield) and Upthorp Common in Stanton (Shepherd’s Grove or Stanton Airfield). Part of the former area of the medieval Stowe Park in Bungay was similarly used for Bungay Airfield.

As elsewhere in the Suffolk claylands there is a recurrent pairing of medieval churches and manorial halls, usually in valley side locations close to a water supply. The halls were often surrounded by water-filled moats in the 13th or 14th centuries as an indication of their status, but the actual ‘hall-and-church’ clusters are probably older. In some cases the clusters have grown into hamlets or villages, but others have remained as small units.

The green-side settlements are both later than the ‘hall-and-church’ complexes and have different topographical positions, being situated on the plateau tops. As a result medieval churches are rare on the greens: the examples at Mellis, Palgrave and South Elmham St Michael are unusual. At Palgrave there is regularity in the layout of the green and its surrounding properties, including the church, that suggests it might be an example of a planned medieval settlement. It belonged to the Benedictine abbey of Bury St Edmunds which pioneered town planning in this region.

The area has a rich store of traditional timber-framed buildings of medieval and Tudor date. These usually have plastered and colour-washed exteriors under peg-tiled or thatched roofs. Construction techniques differ on either side of the ‘Gipping Divide’, with queen-post roofs being common to the north, but largely absent to the south, where crown-post and coupled-rafter roofs were preferred. Some houses had fashionable brick facades added in the 19th century. Red brick and slate roofs were commonly used for 19th century and later buildings.

Ancient woodland is most prevalent to the south of the Gipping, with notable woods such as Combs Wood, Bonny Wood in Barking and Wolves Wood in Aldham. The woods mainly contain oak, ash, field maple, hornbeam and small-leaved lime. Some substantial woods, such as East Wood in Hitcham and Deer Wood in Wattisham were lost to agricultural expansion in the 18th century and have been replaced by straight-edged fields within the ghosts of the old wood boundaries. The older hedges are usually substantial and contain numerous trees, especially ash and oak.

To the north of the Gipping, the ancient woodland is more sporadic and confined to a narrow band on the edges of the plateaux, eg Brockley Wood in Thelnetham, Westhall Wood in Rickinghall Inferior and Burgate Wood in the west, and Abbey Wood in Flixton, Shaddingfield Thicks, and Mutford Big Wood in the east. There has also been woodland enhancement around the post-medieval landscape parks at Thornham Magna, Flixton and Ringsfield. At both ends of the area there is an increase in 18th and 19th century plantations as the estate character increases and the landscape generally becomes more open and planned. The older hedges are usually relatively substantial, but less ‘woody’ than those to the south.

On the more extensive plateau areas to the north of the Gipping the views are frequently open, though with some woodland present in the views. Occasionally there can even be a feeling of exposure. To the south there is a stronger feeling of enclosure with big hedges supplementing the ancient woods to give the landscape a distinctly ‘woodland’ feel.

Although agricultural intensification in the 20th century has thinned out the historical field patterns, enough remains to give a distinctive character to the landscape. There is also still a strong vernacular feel to the settlements, especially south of the Gipping. Localised impacts of development occur, associated with the A14 corridor and some former airfield sites, such as Stanton and Eye. Due to hedgerow removals and the enclosure of many of the greens, the ecological continuity is now localised in a series of hotspots based on the ancient woodlands and associated hedgerow networks or small river valleys.

Views of this Landscape on Google Maps 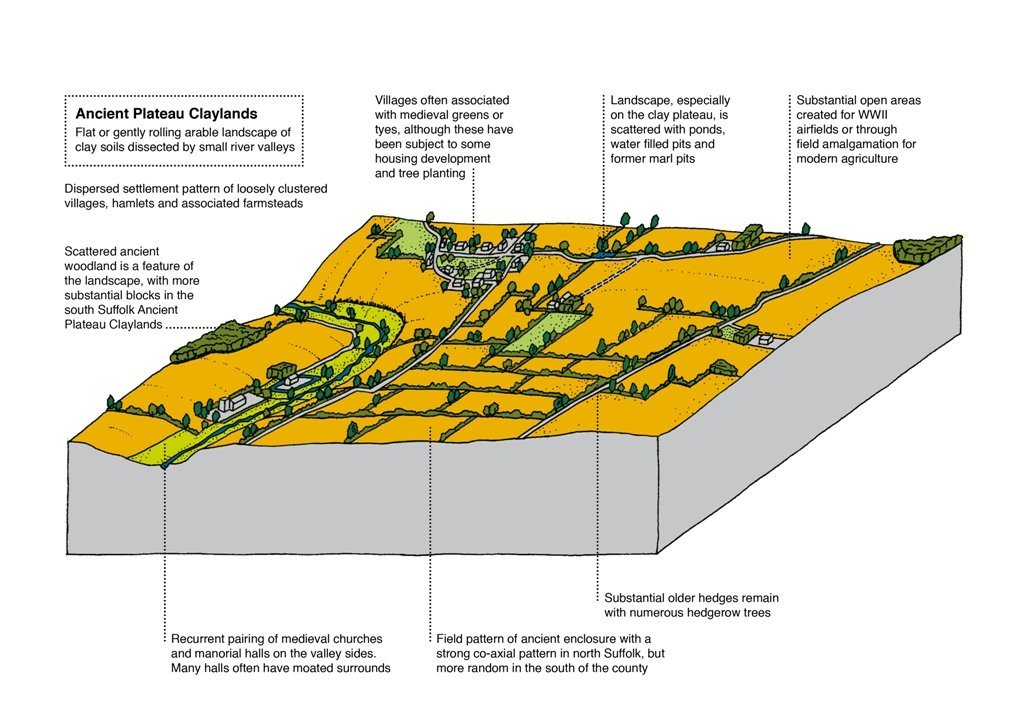 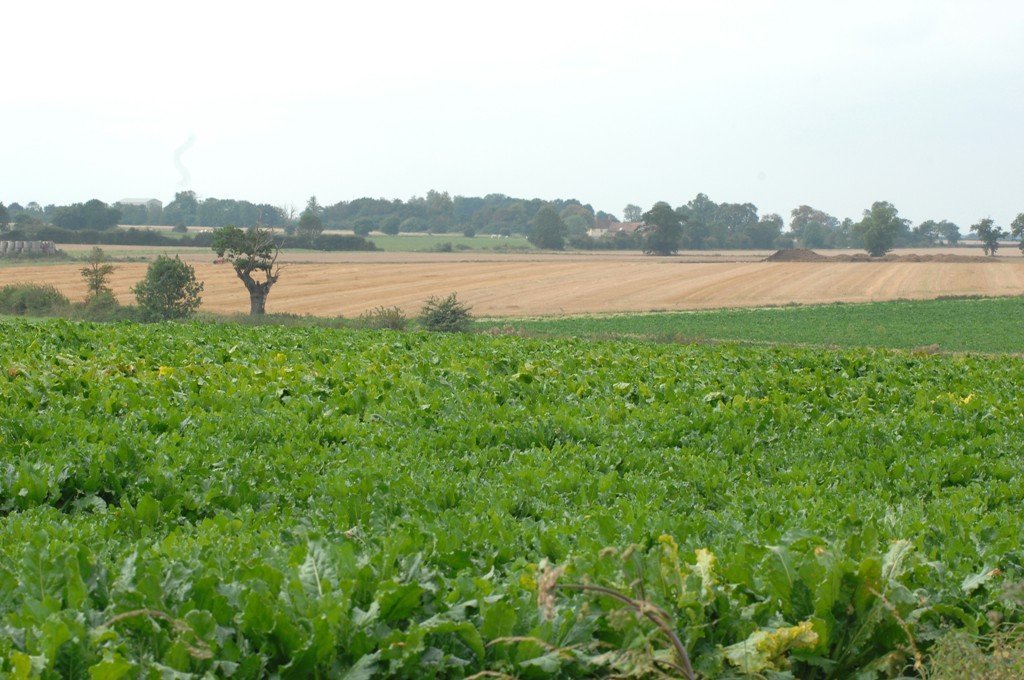