This landscape type occurs in two separate areas of the county:
* The largest area is in south-central Suffolk, between Woolpit and Thurston in the north and Leavenheath and Polstead in the south, bounded on the west by the Stour valley and on the east by the Brett valley.
* The other area is smaller and more fragmentary and lies to the north of Ipswich and Woodbridge.

These are rolling clayland landscapes dissected, sometimes deeply, by river valleys. Although the main soil type is derived from chalky clays left behind by the great Anglian Glaciation, the dissection of this deposit by the area’s rivers has produced a variety of soil types.

The heaviest clays that are prone to water logging lie on the interfluvial plateaux, while lighter soils are found on the valley sides. In some areas there are also patches of sand associated with rivers. In places deposits of glacial sand and gravel were large enough to produce heaths. These were enclosed in the 18th and 19th centuries and now only survive, if at all, as place-names associated with late field boundaries, as at Cornard Heath, Babergh Heath in Great Waldingfield, Hadleigh Heath, Castling’s Heath and Parliament Heath in Groton, Leavenheath and Polstead Heath.

The enclosure over a lot of the landscape retains much of the organic pattern of ancient and species-rich hedgerows and associated ditches. The hedges are frequently high and wide and have a strong visual impact. There are however some areas of field amalgamation and boundary loss, especially on the interfluves between the numerous small valleys. The dissected form of this landscape has reduced the scope for the really extensive field amalgamation found in some other parts of the county. Ancient woodland is scattered throughout in blocks that are often larger than the surrounding fields.
South of a line between Hadleigh and Sudbury orchards become a much more prominent land use.

The settlement pattern in the two areas of this landscape type is very similar, with dispersed farmsteads of mediaeval origin interspersed with some larger hamlets and occasional villages. The farms are large but are mainly owner-occupied rather than estate owned. The farmstead buildings are predominantly timber-framed, the houses colour-washed and the barns blackened with tar. Roofs are frequently tiled, though thatched houses can be locally significant. Medieval moats surrounding the farmhouses are common in the northern parts of both areas, but are much less prevalent in the south. A contrast is the frequent occurrence of small- to moderate-sized greens, frequently linear or triangular in shape, on the clay interfluves of the western area. Many of the greens were enclosed in the 18th and 19th centuries, and some have been infilled with housing, now survive only as place-names. In the east, there are a small number of greens on the northern fringe of the area. The contrast is in large part due to the wider clay interfluves in the west. Some of these flat interfluves were also used for military airfields in the WWII (at Chilton, Lavenham and Rattlesden), and these still have a visible presence in the modern landscape as sometimes extant runways, former perimeter roads or by later infilling with industrial units. Debach airfield lies on the northern fringe of the eastern area.

The hedgerow trees are of typical clayland composition: oak, ash and field maple, with suckering elm, which is especially abundant in those areas with the lightest soils, where it often makes up almost all of the woody component of the hedgerows. Oak trees are usually prominent and compliment the parcels of woodland in this area, adding to the generally wooded feel of the landscape. In terms of crop production, cereals and oilseed rape dominate, the latter making a significant visual impact.

The woodland cover is largely ancient semi-natural woodland consisting of oak, lime, cherry, hazel, hornbeam, ash, holly and elm. The abundant presence of small-leaved lime in many of the woods in the southern half of the western area (as at Groton Wood) is especially noteworthy.

This area has a network of winding lanes and paths often associated with hedges that, together with the rolling countryside, can give a feeling of intimacy. However, the areas of field amalgamation have also created longer views of a rolling lightly wooded countryside.

Although there are some areas of extensive field amalgamation, overall the landscape is largely intact, and accessible thorough a dense network of winding roads with wide verges. In some places there are significant areas of development pressure and land use change, for example through commercial activities, and by the creation of pony paddocks. These are especially noticeable adjacent to the A12, A14 and on the outskirts of Ipswich and Sudbury. In these areas the rural agricultural character of the landscape is clearly diluted. In both parcels of this landscape, but especially in the eastern part, the high-tension overhead power lines and pylons are a note of discord in the landscape. 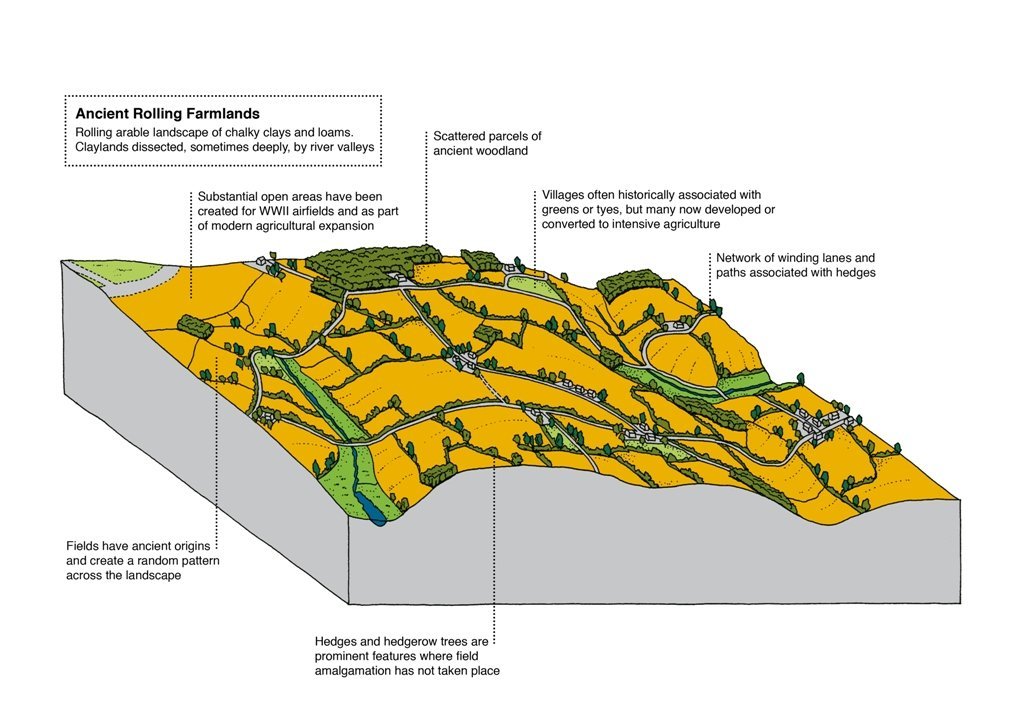