This landscape type is found in a number of areas along the whole of Suffolk’s coast. From north to south, these areas are:

Marshes flanking the Hundred River from Kessingland Beach westward through the Kessingland Levels up to Henstead.

Marshes flanking the River Blyth and Buss Creek from Walberswick westward up to Wolsey Bridge and Tinker’s Marshes.

The marshes of the Minsmere Level extending westward to Eastbridge in Theberton.

The area of a former large mere lying to the south of the existing Meare at Thorpeness and the northern outskirts of Aldeburgh.

Marshes flanking the sides of the Rivers Alde, Ore and Butley from Aldeburgh south past Orford, to East Lane in Bawdsey.

Marshes flanking the Deben estuary, from Bawdsey to Ramsholt on the north side and from Felixstowe to Kirton on the south side, and then a smaller and thinner area at the head of the estuary, from Kyson Point in Woodbridge to just beyond Wilford Bridge.

A small area of marsh on the north side of Holbrook Bay in the Stour estuary, just south of the Royal Hospital School.

These landscapes consist of low-lying, flat marshland beside estuaries and coastal valleys. Underlying the marshes are alluvial deposits of marine origin. Only at Henstead on the Hundred River, the Share Marshes on the Waveney, Sizewell Belts, and Hundred River valley in Aldringham can any significant deposits of peat be found. Marine deposits indicate that in the Roman period and probably for some time afterwards, there was a sizeable sea inlet occupying what is now the Waveney stretching inland as far as Beccles. On the coast at this time Southwold and Sizewell were probably islands, as were some smaller areas such as Buckaney in Alderton and Oxley in Hollesley – both containing the Old English suffix ey meaning ‘an island’. Bawdsey contains the same suffix and would have been virtually an island except for a narrow causeway on the western side.

Most of the marshland within this landscape has been reclaimed for farming at some time but some areas, such as the Minsmere Levels, have been allowed to revert in the 20th century as wildlife reserves. Marshland reclamation began in the Middle Ages, with works being undertaken at Orford in the 12th century, but turbulent weather in the 13th and 14th centuries led to serious set-backs. Losses of arable land on the Suffolk coast are recorded between 1291 and 1341. Among the places affected was Leiston Abbey. This monastery had been founded on a small island in the marshes in 1182, but frequent inundation of its lands by the sea led to rebuilding further inland in 1363. Not all was lost, for John Norden’s excellent maps of 1600-1 show a complex pattern of irregular enclosures along the sides of the Ore, particularly in Sudbourne and Town (Orford) Marshes that are probably medieval in origin.

The rate and scale of marshland reclamation increased greatly in the 18th and 19th centuries. In the northern area, this was facilitated by the establishment of the Commission of Sewers for the Hundreds of Blything, Mutford, Lothingland and Wangford in 1786. Substantial amounts of parliamentary enclosure (though not wholly of marshland), was carried out in the Waveney valley: at Worlingham, and North Cove in 1797, in Barnby in 1800, in Carlton Colville and Oulton in 1801 and in Somerleyton, Blundeston and Lound in 1803. Former open areas of marsh, often used for common grazing, were divided up by straight drainage ditches into strongly geometric layouts of new fields. The drainage was further facilitated by the introduction, around 1800, of pumping mills along the banks of the Waveney.  On the coast, new main drains were constructed through the Kessingland Level in 1812 and through the Minsmere Level in 1812-3.

Ancient settlement in this wet environment is limited to the edges of the marshes and to the islands within it. There are virtually no domestic buildings actually within the landscape. One exception to this is at Iken, where the former Iken Common lay on the edge of the marine sediments in the Alde valley. There was a straggle of houses along its western edge (always higher and drier) by 1783, but a few houses have also appeared along the slightly higher portions of its generally lower eastern edge since its enclosure in 1804.

Although tree cover is not widespread within this landscape, the small amount that is present can have a significant visual impact because the land is so flat. An example of this can be seen on the marsh south of Sudbourne Park, which contains several plantations. The woodland plantations and belts of the Estate Sandlands often fringe these landscapes, as at Hollesley and Alderton as well as in the north at Fritton.

The views are generally open and wide, and there is usually a profound sense of exposure, enhanced when the sea or a wide estuary is close at hand. On the inland side the rising land, and the trees on it, tend to confine the views.

The presence of livestock on the marshes that are still grassland is an important part of the experience of this landscape.

Much of this landscape especially in the south of the county on the banks of the Deben and Orwell and from Orford southwards has been converted from grassland to arable. As well as a significant change in management, this has also led to some degradation of the cultural pattern with the simplification of the dyke network.

Although some parts of it are in arable cultivation, the largest remaining tract of coastal levels in grassland is on the Waveney.  These coastal levels along the river Waveney give the most extensive impression of how this striking landscape would have looked before conversion to arable. The other grassland units are small and more influenced by the features of the landscape that surrounds them. However some, such as the Shotley Marshes, are in excellent condition. 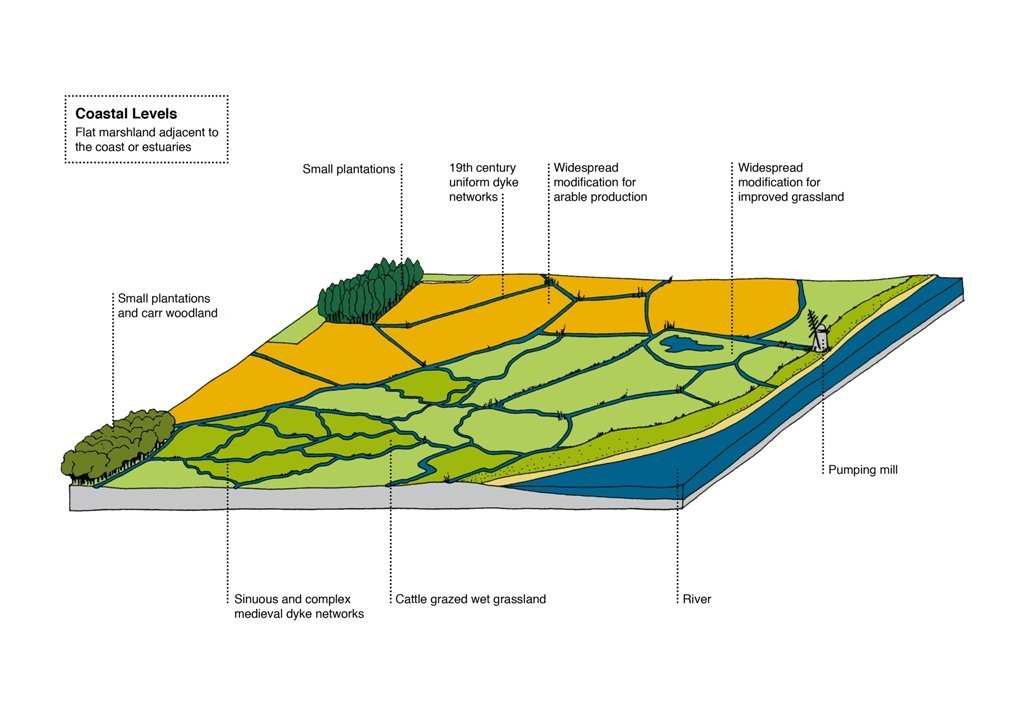 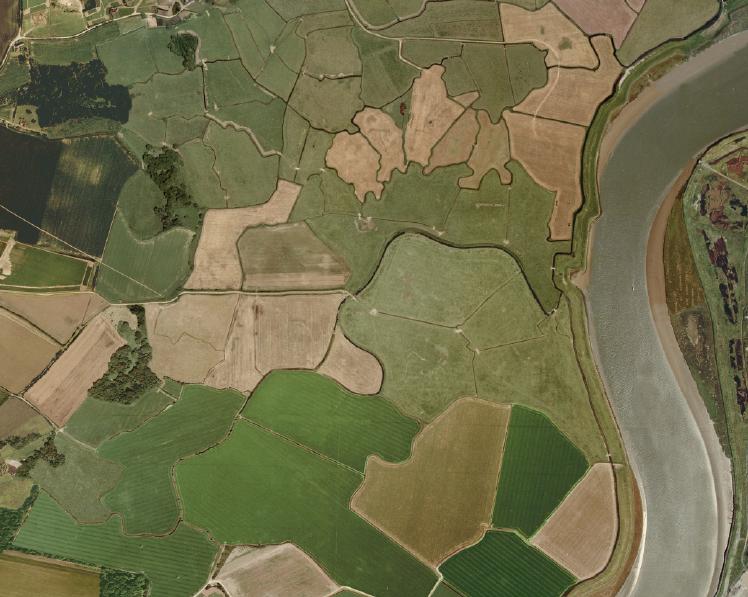 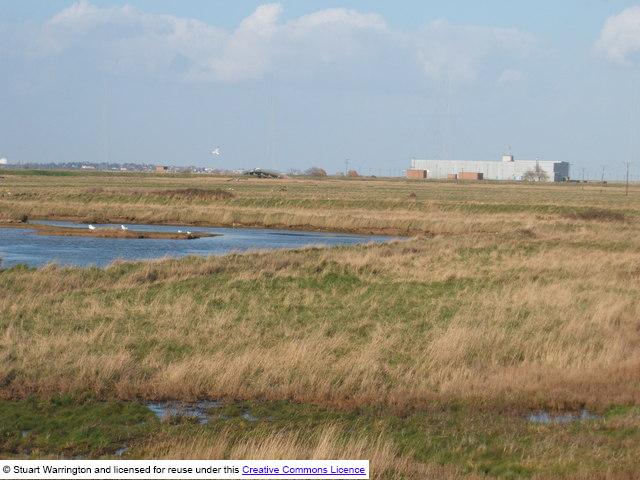 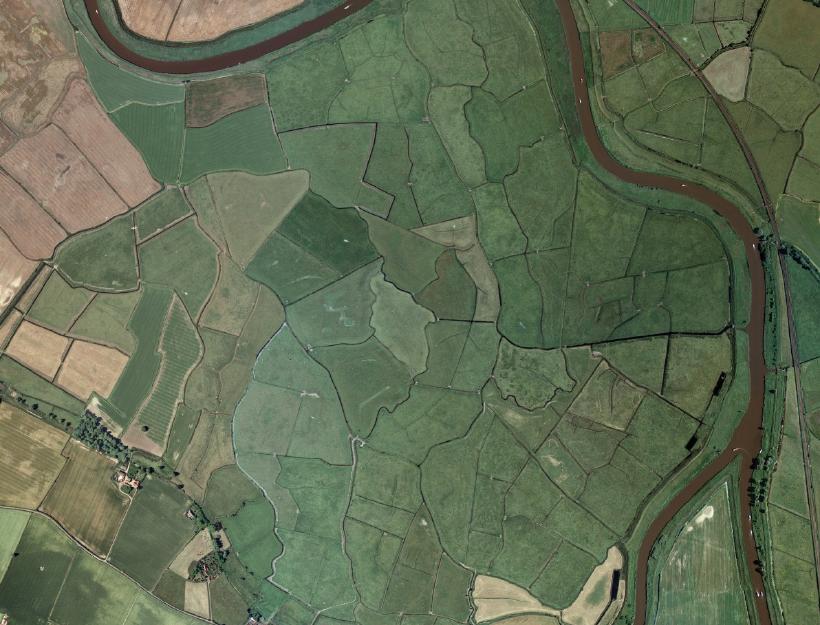