This landscape character type is found in two main areas of the county:

* Firstly, a large area in north-west Suffolk made up of the dry slopes and central plateau  of the Brecks, extending from Freckenham and Kentford eastward on both sides of the River Lark to Wordwell and Hengrave, and northward to Brandon and along the Little Ouse valley to Knettishall.

* Secondly, in south-east Suffolk and in a slightly interrupted series along the coast, taking in a large part of the area known as the Sandlings. The landscape includes the central spine of the Felixstowe peninsula, running from Nacton Heath on the south-east edge of Ipswich eastwards to Levington Heath. It then occupies a series of almost contiguous areas stretching eastward from Rushmere to Martlesham and Waldringfield (but excluding the built-up areas of Kesgrave and Martlesham Heath), from Sutton on the east side of the Deben northwards to Leiston, from Westleton and Dunwich to Southwold and Reydon, and from Covehithe to Benacre. There is also an isolated patch on the east side of the Waveney extending from Herringfleet into Belton and Fritton.

All the parts of this landscape type consist of flat or very gently rolling plateaux of freely-draining sandy soils, overlying drift deposits of either glacial or fluvial origin, sometimes chalky in parts of the Brecks, but uniformly acid and sandy in the south-east. In the south-east there are also surface layers of variable thickness of fine-grained loess deposits, derived from windblown material from glacial sources.

The dry mineral soils of this landscape type and the general absence of watercourses gave rise to extensive areas of heathland or acid grassland that, historically, were used either for sheep grazing or for rabbit warrens. The sheep-grazed heaths were often referred to as ‘sheepwalks’ and this term still survives in place-names such as The Walks in Aldringham, and Westleton Walks. The earliest warrens were established on the poorest soils and were owned by ecclesiastical landlords: the Bishops of Ely had a warren at Brandon by 1252; the prior and convent of Ely received a specific grant of a warren at Lakenheath in 1300, but had held ‘free-warren’ hunting rights since 1251; and Bury Abbey had a warren at Mildenhall by 1328. Many of the warrens and heaths were enclosed in the period of agricultural improvement in the 18th and 19th centuries and now survive mainly as place-names, eg. Eriswell High Warren, Weather Heath and Nacton Heath. The enclosed land, like that of the Planned Fenlands, has the strongly geometric structure that results from the map-based work of surveyors.

In the early 17th century the open areas around Thetford (Thetford Chase) became an important royal hunting ground, used by both King James and King Charles. In 1636 a warrant was issued for the preservation of the king’s game ‘of hare, partridge and other wild fowl’ in a 12-mile radius of Thetford. Private hunting lodges were also established at Fakenham, Barningham and Sudbourne.

Low land prices and a relatively sparse population gave good opportunities for the formation of parks and an abundance of game was a strong added attraction. Medieval and Tudor deer parks existed at Staverton in Eyke/Wantesden, Blythburgh and Henham and one was established around Hengrave Hall c1588 and another at Euston Hall in the1660s. But the great growth of parks came in the 18th century and was linked to the rise in popularity of game shooting amongst the gentry, with the houses often being described as ‘shooting boxes’. Parks appeared at Santon Downham, Culford, Elveden and Brandon in the north-west and at Rendlesham, Sudbourne and Benacre in the east. The apogees of this type of estate were Elveden and Sudbourne, which in the late 19th and early 20th centuries became nationally famous for their shooting, often attracting royalty to their shooting parties.

Large estates are still a feature of this area, particularly in Breckland, and the Elveden Estate is said to be the largest in lowland England. Rabbit, pheasant and partridge shooting is still an important part of the economy of these estate. Their low value after WWI, particularly in Breckland, led them to be bought-up by the newly-established Forestry Commission for forestry plantations.

The arable lands in the north-west were mainly organised as common, open, fields, with some of the more marginal areas only being used intermittently for crops – these occasionally cultivated areas were called ‘brecks’, hence the district’s name, Breckland. The common fields were enclosed in the late 18th and early 19th centuries, frequently through the mechanism of parliamentary acts (starting with Cavenham in 1772), though in areas where major landlords had almost total control (as on the Euston and Hengrave estates) enclosure was able to take place without the need for acts. In the Sandlings, the evidence points to a more mixed picture of some common fields and a substantial amount of long-enclosed land. There was parliamentary enclosure of small amounts of common arable in Iken (1805) and in Orford and Gedgrave (1880), but otherwise common farming was ended through local agreement and often before 1700.

Where there was late enclosure, the field pattern is one of straight-sided, relatively large geometric units. Even where there is map evidence for old enclosures, the boundaries have frequently been realigned to make more regular shapes. This is mainly because field boundaries on these sandy soils were less substantial than those on the clayland and short-lived shrubby species such as gorse are recorded as being used in hedges. In the late 20th century the widespread introduction of irrigation has changed the agricultural potential of this land and irrigated vegetable crops are now an important part of the local economy. The noise of water spraying from irrigation equipment, sometimes of giant proportions, is now often a relatively quiet but relentless constant in this landscape.

The scarcity of water in these landscapes meant that they were not favoured for settlement but were managed as marginal areas to settlements in the adjacent and better-watered valleys. This relation ship to very early settlement led to the Sandlings being used as burial grounds in the Bronze Age and burial mounds appear throughout this landscape, as at Seven Hills in Nacton, Levington Heath and Martlesham Heath, and more occasionally in the north-west in places like Icklingham. It was similarly used in the Anglo-Saxon period, most famously at Sutton Hoo, where there is a cemetery of royal burial mounds of the 6th and 7th centuries AD, and at Snape, where there were comparable mounds.

The settlement that has taken place has been sparse, consisting mainly of isolated hunting or warren lodges and post-enclosure farmsteads.  In the 20th century the sparseness of settlement and the flat nature of the land made it easy to establish a number of WWII airfields: at Lakenheath, Cavenham, Honington and Knettishall in the north-west and at Ipswich, Martlesham and Sutton in the south-east. Of these, Lakenheath has grown into a major American Airforce base, Honington is still a large and active RAF base and Sutton (RAF Woodbridge) is now the base of operations for  23 Engineer Regt (Air Assault) of the Army; the remainder have been swallowed up by quarrying (Cavenham), housing and industrial developments (Ipswich and Martlesham) or reverted to farmland (Knettishall). Some specialised settlements or activities have also been developed: for example the permanent Suffolk Showground; the Newbourne Settlement Scheme for unemployed miners (1935-82); and Thorpeness, developed from 1910 onwards as probably the country’s first ‘holiday village’. These are all located in the Sandlings, while in the Brecks the dense coniferous forests hide the Elveden Forest Holiday complex and the Firestry Commission’s High Lodge Centre.

There are some similarities in the vernacular architecture of the two areas, principally in the high incidence of relatively late brick buildings, although in the north-west the bricks are often white or yellow rather than red. Flint is also widely used in Breckland as a walling material, sometimes with an exterior ‘flushwork’ finish of black knapped flints. Pan-tiled roofs, often black-glazed, are a strong feature of the coastal zone, while 19th century slate roofs figure strongly in Breckland.

Communication lines are prominent in this landscape type. The A11 trunk road cuts across the Becks area and the A12 and A14 figure strongly in the south-east, while the railway line from Ipswich to Felixstowe runs alongside one of the areas.
.
Trees and woodland cover

This is generally a landscape without ancient woodland, but there are some isolated and very significant exceptions: Fakenham Wood in the north-west, and in the south-east, the magnificent and ancient pollarded oaks and holly trees of Staverton Park and the remnants of Sudbourne Great Wood (formerly Scutgrove Wood). All three had hunting usage and Fakenham Wood may have well have been the location of 16 wild ‘woodland horses’ recorded at Fakenham in 1086.

Traditionally, the area also had ‘fields with trees’ (as opposed to the closely grown trees of woodland). These can still be seen at Brakey Pin and Oak Pin in Risby. The creation of farmland out of the former heaths in the 18th and 19th centuries resulted in the widespread planting of tree belts and rectilinear plantations. These are commonly of pines in the north-east (originally Scots, but now mainly Corsican) but of mixed character in the south-east, with chestnut featuring strongly in places like Kesgrave. The characteristic ‘pine lines’ of Breckland originated as managed hedges, many of which have now grown out into lines of very striking twisted trees. There are similar lines in the Sandlings area.

A profound change to the character of the Estate Sandlands came with the establishment of the Forestry Commission’s coniferous forests (Thetford Forest, King’s Forest, Rendlesham Forest and Dunwich Forest) from the 1920s onwards. Some smaller areas of coniferous plantations had been trialled in the 19th century, as in Lord Rendlesham’s Tangham Forest, but now large tracts of previously very open heathland or farmland became dense woodland. Although there has been a very strong visual change, the trees were largely planted within pre-existing land boundaries, preserving much of the form of the highly geometric late-enclosure landscape.

Despite the presence of so much forestry, the views in this landscape are often long and there can be a powerful sense of isolation. The ‘planned’ nature of the landscape over such a large area does, however, mean that there is little variation in the views.

The two sections of this landscape are very different, with the south-east having a stronger urban influence. Martlesham has lost much of its rural character and most of the remnant heathland, such as at Rushmere and Foxhall, is in a suburban environment, further ‘tamed’ by being used for golf courses. Even in the central and northern parts of the coastal area there is a steady pressure of suburbanisation and tourism related development.

In the Brecks the landscape remains strongly rural, except in the environs of Bury St Edmunds and Thetford, but is dominated by high-tech modern farming and forestry. The occasional new intrusion, such as the Elveden Forest Holiday Village, has made little impact as it is hidden in the forest. 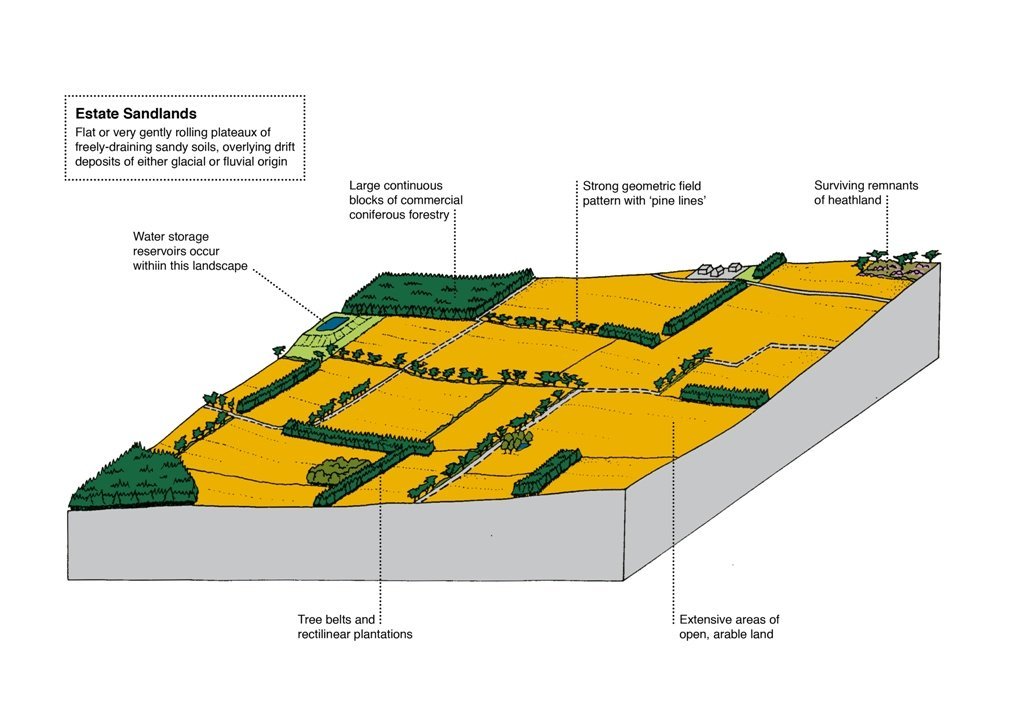 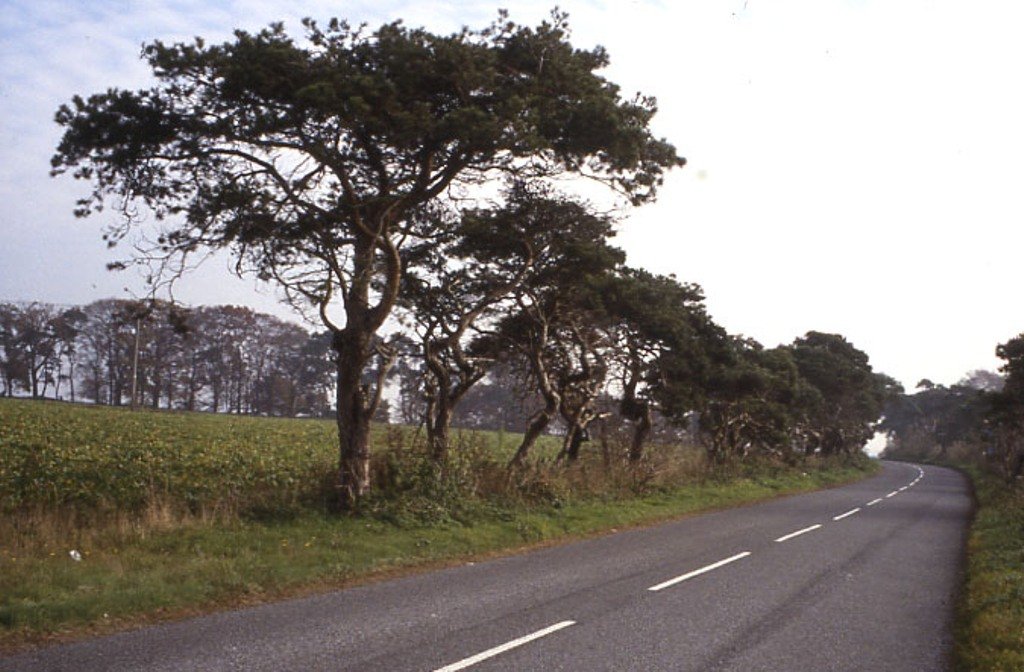