Firstly, in a linear series of clusters that follow the A14 road from Gazeley in the west, past Bury St Edmunds to Thurston in the east, and up along the A143 to Sapiston in the north. This forms a transitional zone between the claylands of central Suffolk and the Breckland sands of the north-west.

Secondly, along the Felixstowe peninsula, between the south-eastern outskirts of Ipswich and Trimley St Mary, but excluding the sandy central spine of the peninsula.

Thirdly, an area of land on both sides of the Deben: around Loudham and Wickham Market to the west; and Campsea Ashe and Tunstall to the east.

Fourthly, a large part of the Lothingland peninsula in north-east Suffolk, from the northern edge of Lowestoft to the southern edge of Gorleston.

In addition there is a fifth small area of the landscape type on the southern edge of the Shotley peninsula around Stutton.

The landform is a gently rolling or flat plateau formed from a mixture of glacial deposits. These chalky clay tills and sandy drift deposits have given rise to mainly free-draining loam and mineral soils. In the north-east of the county the loams have a variable covering of periglacial wind-blown material, with occasional patches of more clayey subsoils

Traditionally the area around Bury St Edmunds was one of large, open, common fields and a moderate amount of common-field arable was still surviving here in the 18th and early 19th centuries, when it was enclosed through Parliamentary Acts. The part to the east of Bury St Edmunds also contained some large heaths and commons (Blackthorpe Heath, Conyers Green, Pakenham Heath, Troston Common, Ixworth Heath, Thurston Heath etc) that were mainly used for sheep grazing, but were enclosed around the same time. The late enclosure has resulted in a rather open landscape with regularly shaped fields bounded by straight hedge lines.

The area to the east of Ipswich has a less clear farming history: some common fields probably existed, but long-established enclosed fields were certainly present as well.  Certainly, no common-field arable survived late enough to be enclosed by Parliamentary Acts. Substantial heaths also existed here, but were mainly concentrated along the central spine of the peninsula (eg Foxhall, Nacton, Levington and Trimley Heaths). The Stutton area of the Shotley peninsula is broadly similar, but without the heath element.

In the north-east the planned character of the fields is very obvious, with large rectangular units surrounded by straight hedges. This regular pattern results from the parliamentary enclosure of common fields and of numerous commons and heaths in the first two decades of the 19th century. The abundance of the commons (Ashby Green, Ashby Warren, Blundeston Common, Corton Heath, Flixton Common, Hopton Common, Lound Common, Lound Green, Boyton Common in Lound, West Heath in Lound, Oulton Common, Manthorp Green in Somerleyton and Somerleyton Common) suggests that the land presented problems for arable farming.

The enclosure of heathland and low-value farmland gave opportunities for the creation of some areas of parkland in the 18th and 19th centuries, as at Fornham, Great Barton and Rougham in the west, at Loudham, Campsea Ashe and Rendlesham in the east, Orwell Park on the Felixstowe peninsula and Somerleyton in Lothingland. There is even an early 20th century landscape park at Stutton. Most of these parks have suffered in the 20th century: Fornham Hall was demolished in 1951 and much of its park was excavated for sand and gravel, Barton Hall burnt down c.1914 and its park has been redeveloped for housing, Rougham Hall was bombed in WWII and left as a ruin surrounded by conifer plantations, much of Loudham Park has been converted to farmland, and Rendlesham Hall was demolished in 1949 after wartime military requisition for the adjacent Bentwaters Airfield. Orwell Park remains, though it is now a school, as does Campsea Ashe Park, with its magnificent early 18th century garden canals and avenue, even though its mansion was demolished in the 1950s.

At Somerleyton, the lavish gardens created for the railway magnate, Sir Samuel Morton Peto, between 1844 and 1862, were much reduced after WWI, but the Hall, the park and many of the garden structures still remain. This Victorian garden replaced an early 17th century one by Sir John Wentworth that was regarded as ‘one of the 3 greatest gardens in the country’, its precocious coniferous plantations inspired wonder: ‘for here Sommer is to be seen in the depth of Winter in the pleasant walks, beset on both sides with fir-trees green all the year long’.  There were also elaborate water gardens, of which the lake called Summerhouse Water is a relict. This lake, like several other linear lakes in the area probably originated as a medieval turbary or peat-digging for fuel, as at Fritton, where there was a thriving peat-digging industry in the 14th century, resulting in the formation of Fritton Decoy. As this last name indicates, several of the lakes were further developed, from the 17th century, for use as duck decoys.

The relatively flat and late-enclosed landscape was utilised for several airfields. A small civilian airport on the south-east outskirts of Ipswich functioned from 1930 to 1998, and two larger were airfields constructed during WWII: Bury St Edmunds Airfield on part of the former Blackthorpe Heath at Rougham, and Bentwaters Airfield at Rendlesham. A small grass airfield still survives at Rougham, but mostly these airfields have now been reused for housing or industrial units.

Today the agriculture is largely arable with grassland confined to parklands and occasional paddocks. Arable production is a mixture of combinable crops (with sugar beet around Bury St Edmunds) and a strong element of vegetable production and outdoor pigs in both the eastern and western parts of this landscape type. The presence of pig production can have a profound visual impact in some places, such as along the A14 at Saxham.

Trunk roads are a prominent feature of this landscape with the A14 running through both of the main areas. Where the regularity of parliamentary enclosure is at its strongest, such as at Ixworth and Risby, even the minor roads and tracks are very regular and straight.

The Roman small town centred on the Hacheston Fiveways roundabout lay on the edge of this landscape, as does its Saxon and medieval successor, the town of Wickham Market.
There are also some substantial villages in all parts of this landscape type: Gazeley, Barrow, Risby, Great Barton, Thurston and Ixworth in the west; Bucklesham, Nacton, Kirton, Trimley St Martin and St Mary and Stutton in the east.  In addition to these, there are substantial numbers of dispersed farmsteads and small hamlets.

In Lothingland there is a sparsity to the settlement pattern, with numerous isolated churches (some in ruins, or partly so, as at Corton, Flixton and Hopton) and evidence of failed green-side settlements (eg. Manthorp Green in Somerleyton and Ashby Green). At Somerleyton, a Victorian ‘model village’ was created by Sir Samuel Morton Peto, supplementing a small industrial hamlet surrounding the brickworks on the edge of the Waveney. The second half of the 20th century saw a great increase in coastal holiday parks at Corton (eg. Pleasurewood Hills) and at Hopton-on-Sea.

The WWII airfield at Rougham has been partially utilised for the Rougham Industrial Estate and, increasingly, for extensions to the Moreton Hall suburb of Bury St Edmunds. Ipswich Airport is being converted into a residential area and Bentwaters, after an increased post-war use as a United States Air Force base from 1951 to 1993, is also being converted to housing.

Woodland cover is scattered, mostly in the form of rectangular plantations and coverts except in the areas around Barrow, Pakenham and Rougham where the cover is more extensive. Hedges are mixed although often dominated by unmanaged elm typical of these light soils, especially on the Felixstowe peninsula.

The influence of the Somerleyton estate in the north east of Suffolk is profound, with a strong estate character of regular enclosures and woodland plantings. This pattern reaches all the way to the coast, but in the process the estate character becomes less strong with just a few plantation woodlands and a pattern of large regular arable fields

The landscape often feels open and even where coverts and hedges are present; the regular arrangement of these features can often enhance the feeling of distance rather than reduce it. Only in those areas associated with parklands and their surroundings is there a more enclosed feel such as at Nacton, Stutton or Pakenham.

The eastern parts of this landscape suffer considerable localised effects from the A14 and A12 trunk roads, while in the wider landscape hedges tend to have a lot of suckering elm and be in poor condition.

In general the picture in the west is more mixed with considerable growth of villages simplifying the landscape locally. However, the overall pattern of large fields with hedges and woodland coverts remains apparent though some of the detail has been lost through 20th century agricultural improvements, and through the construction and redevelopment of airfields at Rougham, Ipswich and Bentwaters. 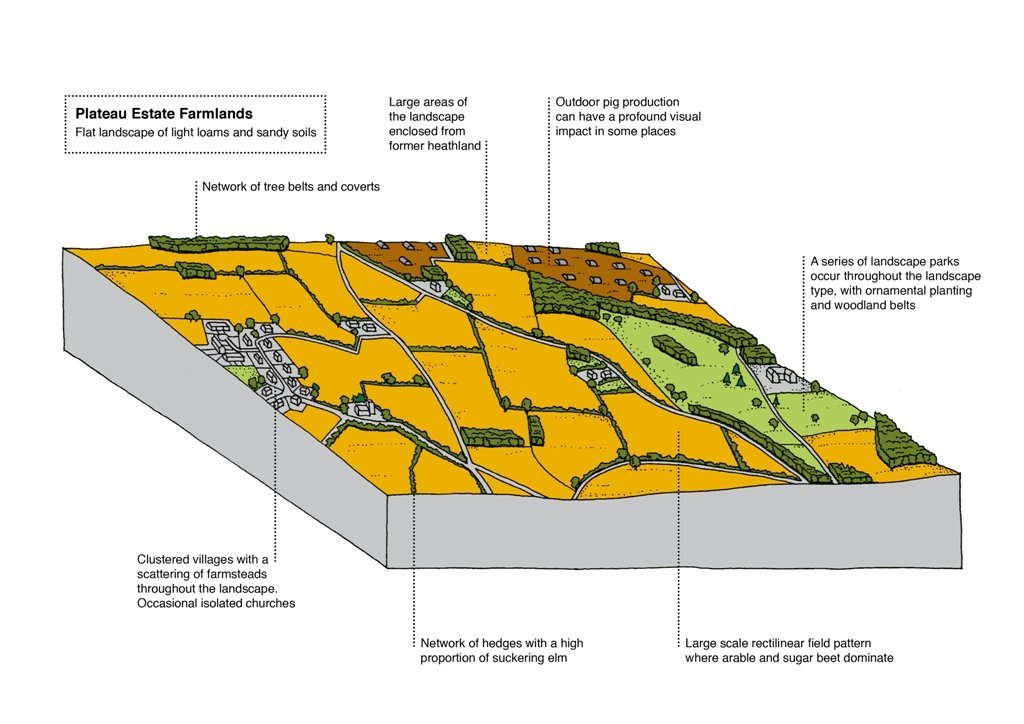