This landscape character type occurs in one larger and one small area in south-east Suffolk:

A plateau defined by the valleys of the Stour to the south, the Brett to the west and the Stutton Brook to the north, and extending from the edge of Lower Raydon in the north-west through Holton St Mary, Great Wenham and East Bergholt to Brantham in the south-east.

A small plateau bordered by the valleys of the Gipping on the north and the Belstead Brook on the south-east and comprising the southern part of Sproughton and Chantry Park in Ipswich.

The plateaux are generally flat or very gently rolling and consist of mixed glacial till or glaciofluvial deposits. In the first area (around East Bergholt) there are surface layers of variable thickness of fine-grained loess deposits, derived from windblown material from glacial sources. The soils are mainly deep loam, which can experience some seasonal waterlogging, but are generally free draining. This allows for the production of irrigated crops, as well as cereals, in what is a predominantly arable landscape.

The landscape of these areas is variable in character. There are areas of ‘ancient countryside’ with old, sinuous hedge lines, but also substantial areas where the boundaries are the straight type of ‘planned landscape’. There is no recorded Parliamentary enclosure of common field arable in any of the areas within this landscape, but there was Parliamentary enclosure of features such as East Bergholt Heath (1817-8).

The farm sizes are not large although they can display elements of ‘estate’ character. Parkland grazing is also a feature, particularly on the Gipping.

The settlement pattern is generally one of dispersed farmsteads and small hamlets, with occasional larger villages. At East Bergholt, several of the linear settlements on the edge of the former Heath have experienced significant 20th century growth, becoming more nucleated villages, their origin being only dimly acknowledged in place-names such as East End and Gaston End.

Woodland is a consistent feature of this landscape, mostly taking the form of plantation woodland often associated with landscape parks such as at Chantry. In these instances non-native landscape planting makes a major impact, with important specimens of species such cedar and wellingtonia.

In the largest areas of this landscape around East Bergholt, once away from the transport corridors, there is a strong sense of isolation and tranquillity in a network of quiet lanes and  tall hedgerows. This can also be found to some extent at Chantry with its excellent parkland. However in many of the other parts, the experience is compromised by the effects of the A12 and A14 trunk roads.

The condition of this landscape is mixed, with some areas slightly degraded, but there are also gems such as Chantry Park and the lanes, hedges and pollard oaks of areas to the north of East Bergholt. 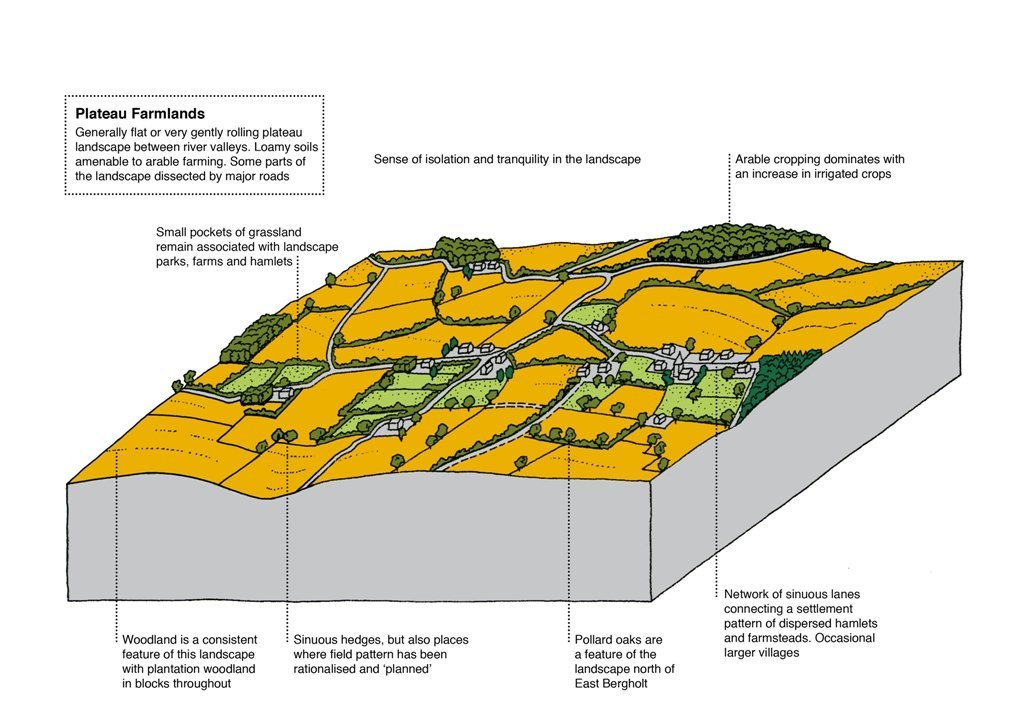