A landscape of chalky soils, large regular fields, with paddocks and shelterbelts

This landscape type is found on the western fringe of Suffolk, running from the county boundary in the west around Newmarket and though Snailwell, Chippenham and Freckenham, to Barton Mills on the south side of the River Lark.

This is an open very gently rolling or flat landscape with free-draining mineral soils and deep loams.

Newmarket Heath area to the west of the town was formerly more open, but is now occupied by the world-famous racecourse and racehorse studs with rectangular paddocks and linear plantations. Elsewhere, planned enclosure in the 18th and 19th centuries has replaced the extensive areas of common fields that dominated the landscape in the 17th century, with geometric late-enclosure fields. Where land is devoted to horse racing, as in Exning, the enclosure pattern is a small network of paddocks divided up by post and rail fencing and narrow shelterbelts.

The villages form tight clusters in the river valleys, the traditional houses and other buildings are often flint-walled and thatched, but there is a strong presence of new large “prestige” homes that are suburbanising the feel of many villages.

There is a fragmented woodland cover of small plantations and belts made up of species such as oak, Scots Pine and willow. The deep free-draining soils found here mean that crop production is focussed on field vegetables supported with irrigation. This type of cropping has a significant visual impact on the landscape and is in clear contrast to the wooded chalk slopes to the south with their thinner soils on which cereals predominate.

The hedgerow cover is sparse and uniform, with straight rows of hawthorn or narrow belts of trees dividing large fields. In the places where stud farms are frequent, such as south of Newmarket, the enclosures are smaller and bounded by a comprehensive network of shelterbelts, where the species choice is often ornamental.

The feel of this landscape is one of open space with long views, which is emphasised by the straight roads and regimented pattern of belts and hedges. However, where the “studscape” is most apparent, belts of trees and woodland planting confine the views.

This is a largely tidy and well-kept landscape that has been maintained by the income from farming the good soil and the horse racing industry. However, the expansion and suburbanisation of villages is eroding the local character. 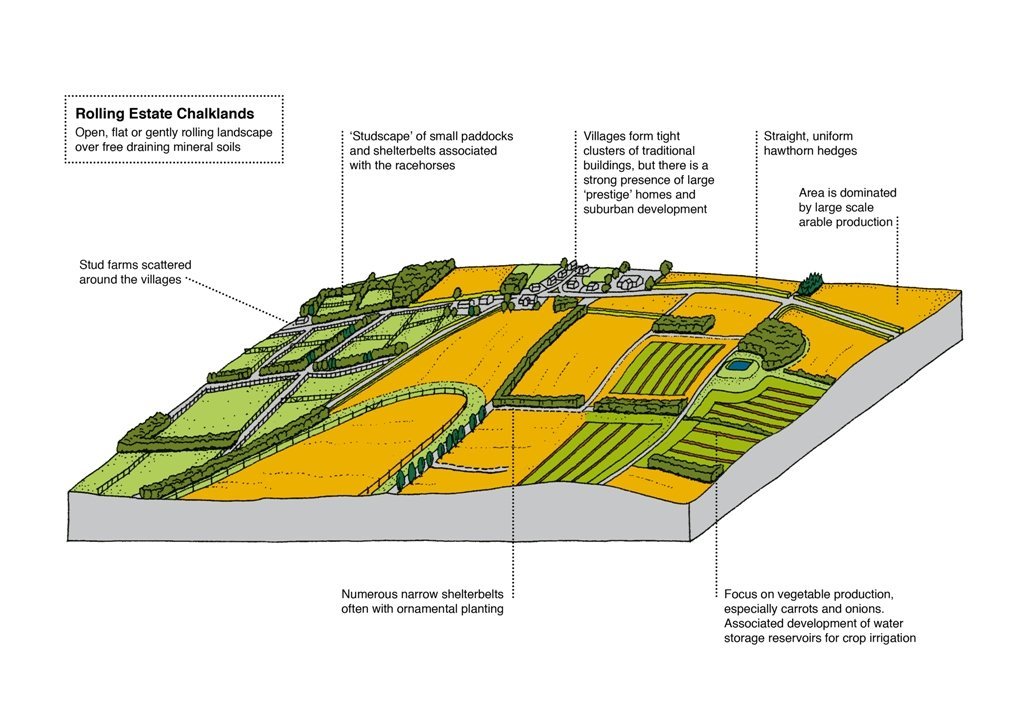