This landscape character type occurs in east Suffolk as linear bands in the middle reaches of the valleys of these rivers:

This landscape, on the eastern edge of the central Suffolk clay plateau, consists of gently sloping valley sides and plateau fringes. Its soils range from occasionally waterlogged clays to sandy loams overlying glacial till and other glacial outwash materials. In most cases the valley heads have the heaviest soils, becoming lighter and occasionally gravely in the lower reaches.

The field patterns are slightly organic in appearance, but with a tendency to a co-axial arrangement with the principal axes at right angles to the rivers. In the lower reaches there can be more planned-looking landscapes resulting from late enclosure or estate-inspired reorganisation.

The soils are generally well-drained, so greens are infrequent, but there are examples at Middleton Moor and the former Carlton Green and Curlew Green in Kelsale. Landscape parks, are, however, numerous: Sibton Park, Cockfield Hall in Yoxford, Rookery Park in Yoxford, Theberton Hall and Theberton House, Darsham House, Carlton Park, Glemham House, Marlesford Hall, Brandeston Hall, Easton Park (part) and Glevering House and Glevering Park (part) in Hacheston. These are mainly of 18th and 19th century date and moderate in size, as are their associated estates.

This landscape contains a number of substantial villages: Yoxford, Middleton, Theberton, Kelsale, Stratford St Andrew, Great Glemham, Easton and Kettleburgh, although Saxmundham is the only town. The Roman ‘small town’ that underlies the Hacheston crossroads is also in this landscape, but its later successor, Wickham Market lies just outside.

Most of the villages are medieval in origin and are often linear in form due to their valley locations. There are also some dispersed farmsteads. Moated sites are infrequent due to the better drained nature of the soils, but there are some important sites on the edges, such as Moat Hall, Parham (a romantic early Tudor brick and timber house that was a former residence of the Uffords, earls of Suffolk and the Lords Willoughby); and Kettleburgh Hall (a large now empty moated site beside the church that was once the seat of the knightly Charles family who rose to prominence as royal officials in the 13th century).

The A12 trunk road crosses several of the valleys within this landscape type, following a long-established route that skirts the edge of the clay plateau from Ipswich northwards to Lowestoft. This became a turnpike road in 1785 and one of the tollhouses survives on the north side of Saxmundham. In places, as around Wickham Market, this road was re-routed in the 20th century into modern dual-carriageway bypasses, but much of it still meanders through villages. The east coast railway, opened in 1859 as the East Suffolk Railway, runs roughly parallel to the A14 about a mile to the east of it.

There is fragmented deciduous woodland throughout, while north of Campsea Ashe the cover is more extensive with interlocking woodland views. There are also plenty of hedgerow trees in what is often an extensive hedge network.

This is an arable landscape broken by undulating topography, woodland, well-treed hedgerows and winding lanes. In addition in some places the landscape parks have a significant visual impact, especially in places where they are on the gentle slopes of the valley sides, as can be seen to the south of Marlesford Hall.

The condition of these landscapes is very variable throughout and is often influenced by major transport routes such as the A12 and the presence of larger settlements such as Saxmundham and Wickham Market. 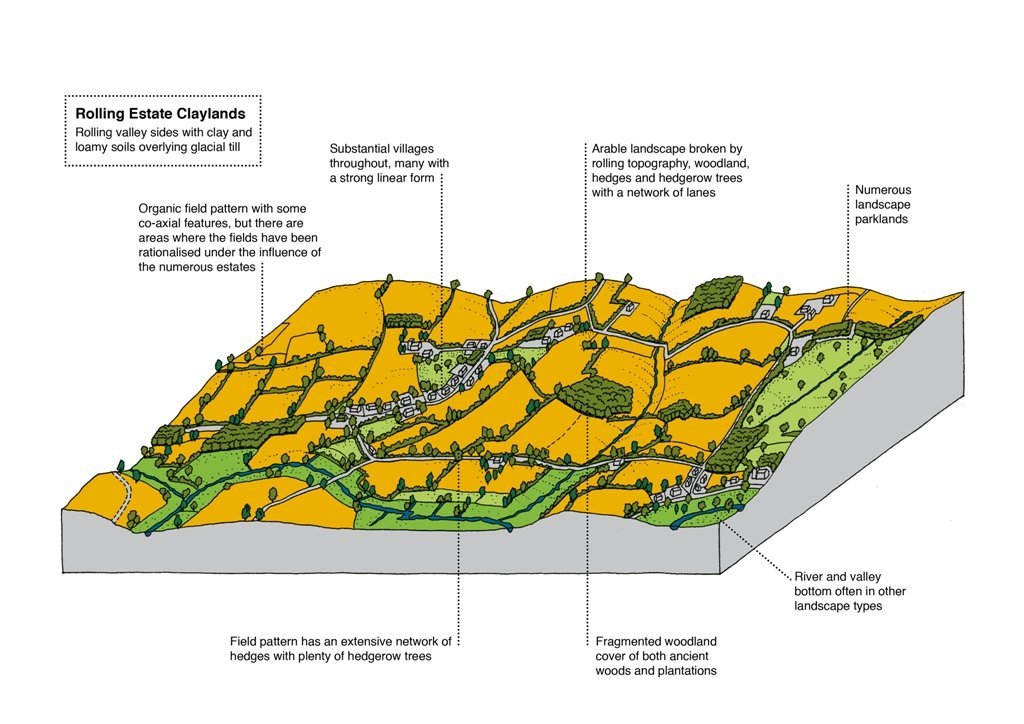