This landscape character type occurs in two main areas of the county:

On the south side of the Lark valley from Tuddenham eastward to Hengrave and a narrow strip on the north side from West Stow to Fornham St Martin.

On the sides of the lower valleys of the east Suffolk rivers:
* the land surrounding Smear Marshes in the area of South Cove and Reydon
* the sides of the Wang valley from Sotherton to Wangford
* the Blyth valley sides from Halesworth to Blyford and its southern tributary from Bramfield to Wenhaston
* the valleys of the Alde and Fromus from Farnham and Saxmundham to Iken and then forming a narrow band above the coastal levels to Orford and Gedgrave, around the Butley River and its tributaries to Hollesley and Bawdsey
* the Deben valley from Ramsholt, past Woodbridge and Ufford almost to Wickham Market, and along its western tributaries to Martlesham, Newbourne, Falkenham, Brightwell and Bucklesham
* along the north side of the Orwell Estuary from Felixstowe to the margins of Ipswich.

In the Lark valley this landscape is found on the flat or gently rolling river terraces where deep, free-draining, sandy soils of the Newport series overlie sandy glacial deposits on top of chalk. In the east coast valleys, this landscape is found on similar sandy Newport series soils on river terraces and coast-edge slopes where they overlie thin glacial deposits on top of Crag sands.

In the Lark valley the dryness of the soils has limited their land-use and historically there were extensive heaths – Tuddenham Heath, Cavenham Heath, Mill Heath, Home Heath and Clamp Heath. Of these, Cavenham Heath is the largest survivor and is now a nature reserve. Part of Tuddenham Heath was used as a WWII airfield but is now largely a gravel quarry. The field pattern here is predominantly one of late enclosure with straight hedges and tree belts.

In east Suffolk, the landscape generally occurs as narrow valley-side strips that echo the landscape character of the adjoining uplands. There is a greater mix of land and soil types so patterns of fields can be quite variable from straight, geometric units to more sinuous shapes. As in the Lark valley, however, dryness was a problem in some areas and this is reflected by a number of extant or former heaths or commons, particularly in the northern half: Wrentham Common, Frostenden Common, Cove Common, Reydon Common, Wangford Common, Wenhaston Black Heath, Wadd Common in Snape and Iken Heath.

In most places the estate character of the settlement and enclosure is not particularly marked, showing up sometimes as higher densities of timber trees in the hedges or in locally similar groups of buildings.

Being elevated land beside water courses, these landscapes were utilised for settlement from an early date. On the river terrace at Fornham All Saints there are the buried remains of major Neolithic ritual monuments that now only show as cropmarks – a large causewayed enclosure, a long cursus and various rings. Bronze Age building remains have been found at Cavenham, and at Wenhaston in the Blyth valley there is the site of small Roman town. Medieval churches with clusters of houses around them line the sides of the valleys at intervals of about 1.5 to 2 miles, with some additional isolated farmsteads in between.

At Hengrave a park was established partly over former common field strips in 1587 to enhance the setting of the magnificent early Tudor mansion beside the medieval church.
The 18th century park on the other side of the valley at Fornham St Genevieve has now disappeared and much of the land has been quarried for sand and gravel. Two parks were also established in the 18th century overlooking the Orwell Estuary: Orwell Park and Broke Hall, the latter having a landscape designed by Humphry Repton (Red Book of c.1792).

Between the Alde and the Deben there are some isolated occurrences of this landscape within the Coastal Levels which reflect the former existence of marshland islands, as at Iken church, Burrow Hill in Butley, Oxley Dairy in Hollesley and Buckanay Farm in Alderton. In the last two cases the place-names contain the Old English suffix –eg meaning ‘an island’   (Oxeneye (1327) = ‘oxen-island’ and Bukney (1521) = ‘goat-island’). Iken church was the site of Icanho, a monastery founded in mid 7th century by St Botolph and destroyed by Viking raiders in the late 9th century. A probable monastery of a similar date existed at Burrow Hill, not far from the medieval Butley Priory. Semi-islands also seem to have existed at Bawdsey (‘Baldhere’s island’), Gedgrave (‘goat grove’; the Hall is on the site of the lost church of St Andrew, where seamen’s wives from Orford went to pray for their husbands) and Raydon Hall (’rye hill’) in Orford.

In the Lark valley buildings are frequently of brick or flint with tiled or slate roofs and have a 19th century air of symmetry and planning, contrasting with the more vernacular timber-framed buildings of the clayland areas to the south. The Tudor white bricks of Hengrave Hall are an early precursor of the strong 19th century fashion for white bricks, with production sites in the valley at Flempton and Culford.

Red brick 19th century buildings are a strong feature of in the eastern valleys, with the material coming from a number of small local brickworks, as at Frostenden, Uggeshall, South Cove, Wenhaston and Benhall – of these, the South Cove Brickworks at Cove Bottom is the sole survivor. Roofs often have curved pan-tiles, sometimes black glazed.

Woodland in the form of belts, coverts and plantations is a consistent feature throughout these landscapes and is a reflection of its late enclosure character, but there are also occasional semi-natural oak woodlands on some of the slopes. There are even ribbons of wet woodland along some of the small tributaries, such as ‘The Wilderness’ along the Falkenham Brook.

In contrast to the surrounding ‘uplands’ of the Estate Sandlands, these landscapes are usually more complex and intimate, the managed, open, estate feel being replaced by a pattern of small streams and smaller fields. The views are shorter and more confined and settlement is more evident so the countryside feels less empty.

Many of these valley side landscapes are under considerable development pressure because there are concentrations of settlement and land use change. However there are excellent areas of semi-natural landscapes and intact landscapes in many places. 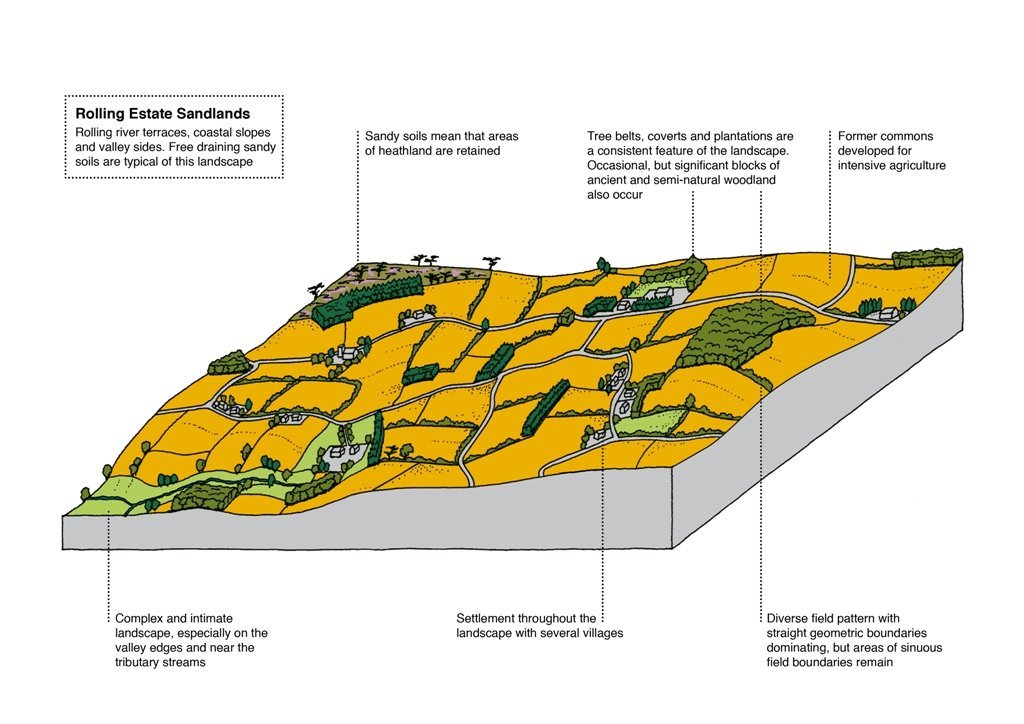