These landscapes are found in the upper reaches of most of the east Suffolk rivers:

These landscapes occur on the sides of the valleys that cut through the central clay plateau of Suffolk. The slopes are generally moderate, but in some places, especially along the tributaries of the Waveney at Fressingfield and Mendham, there are steep slopes that are very unexpected for East Anglia. At Hoxne, the narrow, steep ridge between the Waveney and the Chickering Beck valleys inspired comparison with a heel-sinew (hohsinu in Old English) and hence the name ‘Hoxne’. Altogether, these slopes make an unexpected and striking contribution to the landscape. Most of the soils in these valleys are the better drained and more workable clays of the Hanslope series, but in some places there are more mixed soils, especially in the valley of the river Dove where both the lighter Ashley and heavier Beccles series occur. In the narrower valleys, the landscape includes the valley bottoms and in a couple of places there are substantial ancient valley-bottom meres – that at Framlingham is still a major landscape feature and acts as a mirror for the medieval castle perched above it, but the one at Earl Soham that gave its name to the place (Old English sæ-ham ‘lake settlement’) has been infilled, leaving just an outline.

Field sizes on the valley bottoms are generally smaller than those of the surrounding slopes and uplands. Moving up-slope the fields become larger as there is a transition from meadows to arable fields.  Field shapes are generally organic in character, with substantial and long-established hedges of hawthorn, blackthorn and dogwood. There is occasionally some localised estate influence from landscape parks and the associated plantings of belts and coverts such as at Sotterley, Heveningham and Redisham.

These river valley slopes, with their combination of closeness to water and better-drained and more easily cultivated soils, have been foci for settlement in the claylands from an early date.

At Burgh there are the eroded remains of a major Late Iron Age and Roman enclosure on a slight promontory overlooking the River Lark. At Eye, recent excavations on the north side of a tributary of the Dove have revealed an extensive Anglo-Saxon settlement overlying evidence of earlier Bronze Age and Iron Age activity. The core of the market town of Eye lies on the other side of the tributary and, as its name implies, occupies an elevated ‘island’ (Old English eg) surrounded by low-lying land, including a probable former mere (now Town Moor) on its south-west side. Central to the town is the important Norman motte-and-bailey castle constructed before 1086 by William Malet as the administrative hub for his vast east Suffolk estates. The town grew up around the castle and owes its distinctive oval street layout to the shape of the castle’s baileys. The market town of Framlingham in the upper Ore valley is also dominated by its castle, though here the castle lies on the edge of the town and the central focus is the market square. The original castle, built in the 1140s for Hugh Bigod, the rebellious earl of Norfolk, was replaced around 1190 by a larger one with impressive stone walls, built by his son Roger.

Across the claylands there is a repeated pattern of former manorial halls and their associated churches on the sides of the river valleys, even when some of these ‘valleys’ are no more than small folds in the plateau. The important combination is access to water and sloping land with good arable potential. The pattern was certainly established by the 11th century and may be at least a century or two older. In places the original hall-and-church complexes have grown into hamlets or villages, but others have retained their original identity.

At Letheringham in the Deben valley, the original hall-and-church complex beside the river gained a medieval moat around the hall (now called Old Hall) but the church disappeared and was replaced by a mill, with unmarked graves in its garden. The existing parish church, a short distance down the valley, originally functioned as the church of an Augustinian priory founded around 1194 by William de Boville, the lord of Letheringham. Following the priory’s dissolution in 1537 parts of the site were utilised for a new mansion, called Letheringham Abbey, for Sir Robert Naunton, Secretary of State to King James I. The last fragment of this was demolished 1947-9 and now only the brick walls of its gardens survive. Letheringham Lodge, on the hill above the Old Hall, is a remarkable timber-framed building on a very small moated island that was built in early Tudor times as a recreational pavilion (with deer park associations) for Sir Anthony Wingfield, Vice-Chamberlain of the Household to King Henry VIII.

At Bruisyard in the Alde valley, the Hall incorporates some remains of a nunnery of the order of St Clare that was founded c.1364 as an aristocratic and quiet retreat for Maud of Lancaster, Countess of Ulster. The parish church lies about half a mile away, closer to the river, and is probably a relict of an earlier manorial complex, the nunnery have been established at a place that was formerly called Rokehalle.

The impressive moated site of South Elmham Hall lies on a promontory between The Beck and one of its tributaries. In medieval times this was one of the rural palaces of the bishops of Norwich and appears to have been founded c.1100 by Bishop Herbert de Losinga as a quieter replacement for an earlier estate centre at Homersfield in the Waveney valley. Close by in its peaceful side valley are the ruins of South Elmham Minster, which was probably founded by Bishop Herbert as a quasi-monastic retreat or private chapelry.

The absence of extensive areas of poorly-drained plateaux in this landscape type means that there are few substantial greens or commons. An exception is Thrandeston Great Green, which is on a clay cap of the heavy Beccles series overlooking the Waveney. The more linear Standwell or Thorndon Green has now been largely infilled with housing and the parts of Brome Common and Mettingham Green that fell within this landscape type have also been enclosed.

The vernacular housing styles are typical of the claylands: timber-framed houses (usually plastered and painted) interspersed with red-brick ones and timber-clad and tarred barns, the roofs mainly tiled (plain or pantiles) or thatched.

The woodland is usually (and historically) on the upper fringes of the valley sides and the adjacent plateaux. Although woodland cover is generally fragmented, within the confined landscape of the valleys a small amount of woodland can have a considerable visual impact. The hedges are a typical mix of clayland species, with ash and oak (often pollarded) as the most prominent hedgerow trees.

The majority of these valley landscapes have at least some grassland, often in the form of slip meadows along the steam sides such as at Stoke Ash and Thornham at the head of the Dove. There are also four landscape parks that fall partly into these valleys: at Helmingham, Heveningham, Redisham and Sotterley, and two former ones at Brome and Hoxne. There were also parts of medieval and Tudor deer parks at Bungay (Stow Park), South Elmham, Eye, Framlingham, Earl Soham and Letheringham.

Especially in the areas of plateau claylands these landscapes can provide a welcome change from what can be the open, arable vistas. They usually have more complete hedgerow networks, and the visual impact of these is enhanced within the more contained landscape of the valleys.

As these valleys are a focus of settlement they are often exposed to adverse change through intrusive valley side developments or changes of land use, especially, the expansion of garden curtilages and the widespread introduction of horse grazing. However they also have within them many areas of landscape in good condition that provide the appropriate context for the adjacent valley floor landscapes. 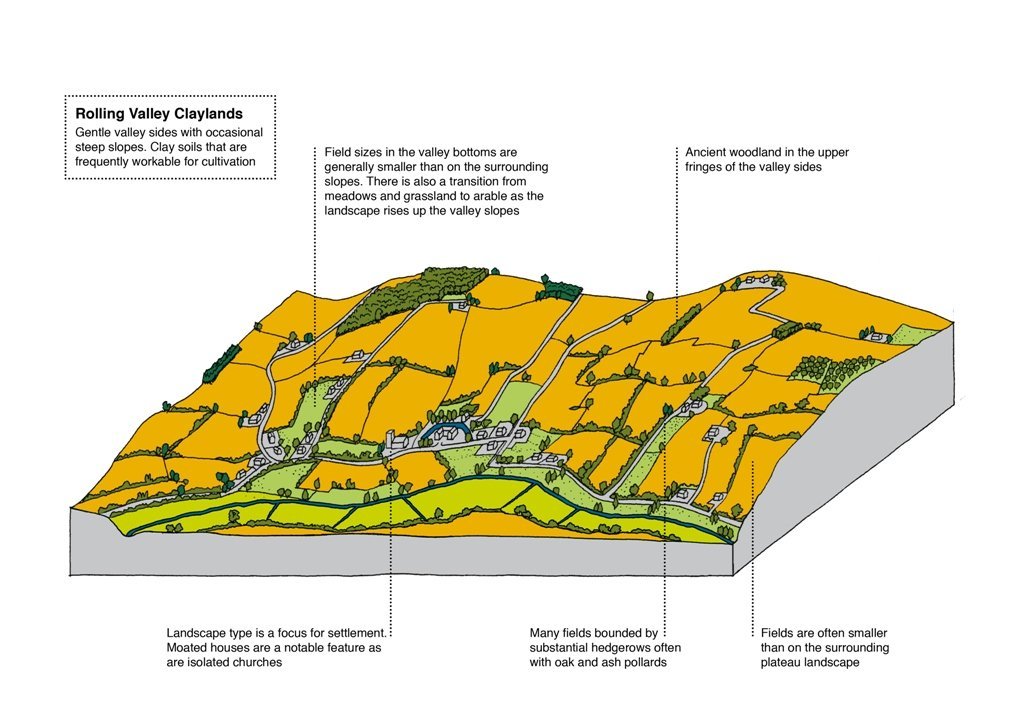