Valley landscapes with distinctive areas of grass and gorse heaths

This landscape is found in three areas of the county:

In north Suffolk in the Little Ouse and Waveney valleys from Hopton eastward to Hoxne and in discontinuous patches to the east: at Weybread and Mendham, Homersfield and Flixton, Bungay, and from Beccles to Oulton. Also in the lower part of the Hundred River valley from Ellough to Kessingland.

In south-east Suffolk in the Fynn valley eastward from Witnesham to Woodbridge and in the valley of the (east Suffolk) Lark southward from Grundisburgh to its confluence with the Fynn.

This landscape type occurs on a mixture of outwash deposits from the ice-sheets of the great Anglian glaciation – principally silts, sands and gravels, but also including some chalky till and, in places, silts or brickearths from former lakes or meres.  In the major valleys it forms relatively narrow bands of well-drained terraces and slopes above the valley floors. In small valleys such as the Fynn it fills the whole valley.

The geological background has resulted in the frequent occurrence of dry heaths, as at Hopton Common, Wortham Ling, Stuston Common and Warren Hills, Shotford Heath, Outney Common in Bungay, and Woolpit Heath. In the past these provided low-quality sheep or rabbit grazing, but in the 20th century many were exploited for sand and gravel, eg at Shotford Heath, Homersfield, Flixton Park and Tostock, leaving a legacy of large water-filled former pits.  At Woolpit the calcareous brickearth deposits were used, particularly in the 19th century, for the production of bricks famously known as ‘Woolpit  whites’.

Many of the river-terrace heaths were originally exploited as commons by farmers living nearby, as a source of grazing and especially for gathering gorse which was cut for cattle fodder.  Some survive as unimproved open areas, eg Wortham Ling, but others were enclosed and converted to farmland through agricultural improvements from the 18th century onwards and are characterised by straight boundaries. In recent years some have become important areas for the production of irrigated crops, such as herbs at Brome and Oakley. Others were incorporated into landscape parks (Flixton and Worlingham) or, more recently, made into golf courses (Stuston).

Where the soils are better quality, there are older farm units with mixed pasture and arable, characterised by more sinuous and older field boundaries, usually at right-angles to the watercourses, giving a co-axial character to much of the landscape.

The river terraces and valley sides were a focus for settlement, like the Valley Clayland and Valley Farmland landscapes. Evidence is often from a very early date because this landscape type provided dry sites that could be easily cleared and farmed while living in close proximity to sources of water and woodland on the adjacent clay soils. The ongoing archaeological excavations at Flixton Park Quarry, have found settlement and funerary activity covering four millennia, ranging from Neolithic and Bronze Age burial mounds to an Anglo-Saxon village and cemetery. Important early settlement evidence has also come from the ominously-named Bloodmoor Hill in Gisleham.

Numerous villages and hamlets with medieval churches occur along the valleys indicating a continuance of the importance of this landscape for settlements. However the limitations caused by dry and poor soils may account for the disappearance of churches at Willingham, Worlingham Parva and Creeting St Olave, and the now isolated churches at Market Weston and Redgrave.

Villages tend to be more tightly clustered than is common across north Suffolk as a whole. The river terraces have also been a focus for larger settlements such as Woolpit and Botesdale.

This landscape has a good tree cover and a few fragmented woodlands on the valley sides, but the views are much more open in the transition between the valley and plateaux landscapes. There is fragmentary broadleaved woodland cover, with multi-species hedgerows including oak, ash, field maple and hawthorn. The remnant heaths are dominated by poor dry grassland, with gorse (or furze) often in abundance.

This landscape can form rather bleak vales such as at Barnby or to the east of Hopton. However within them there are some intimate small valleys, as at Thelnetham.

The condition of this landscape is very mixed with some important semi-natural habitats such as Wortham Ling and parts of Stuston Common in good condition. However, as with the Valley Clayland and Valley Farmland landscapes, away from the valley sides the completeness and connectivity of the hedgerow network reduces. 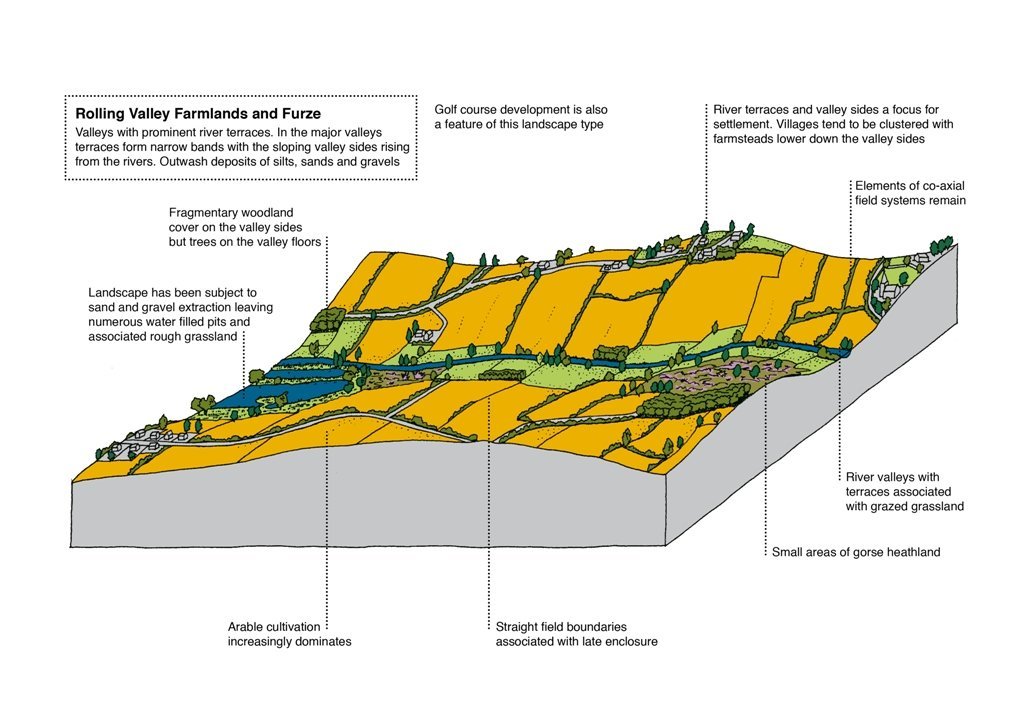 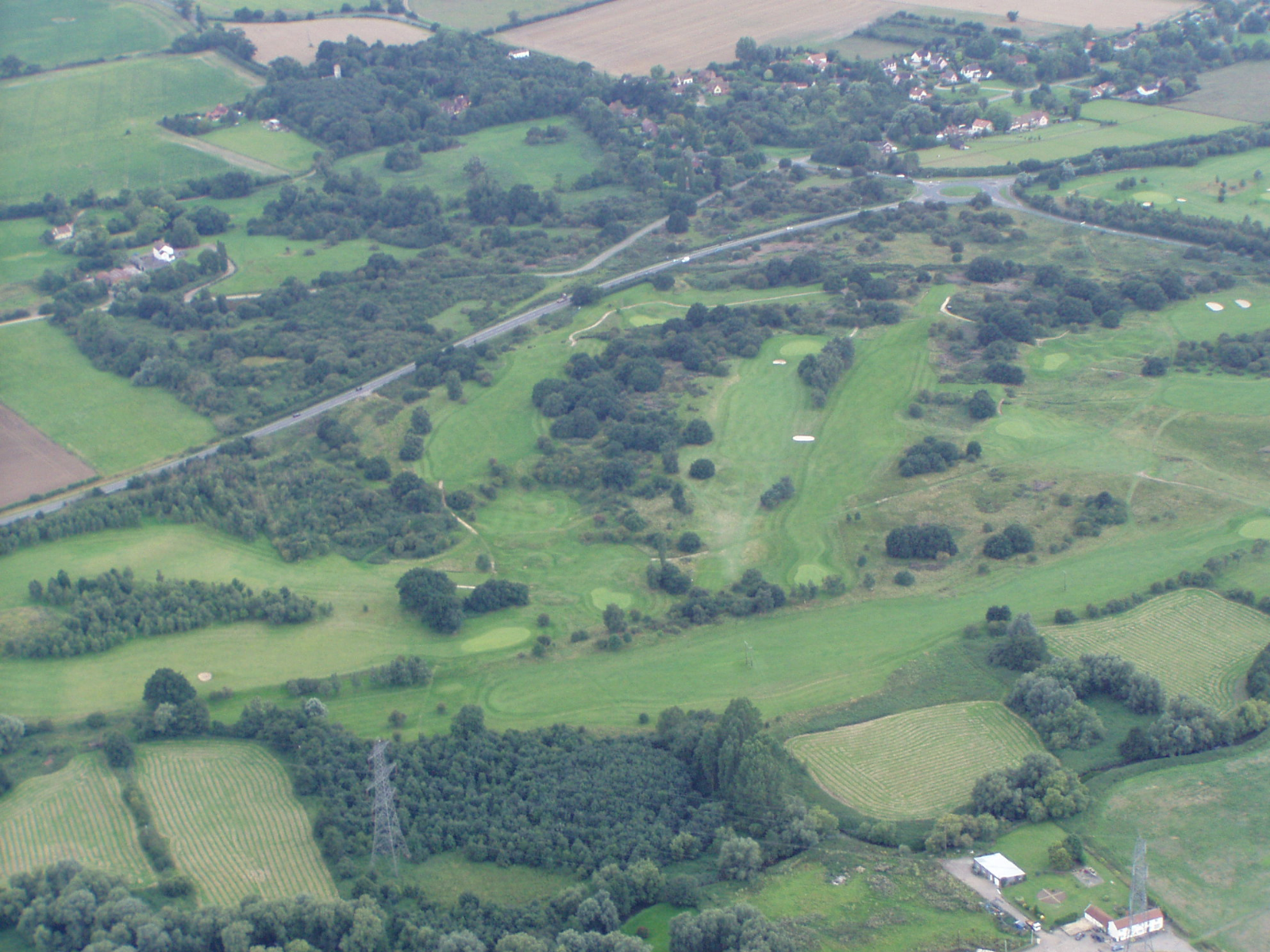