This landscape character type occurs in two main parts of the county:

The Stour valley from Cattawade and Manningtree upstream to Haverhill and Kedington, including the tributary valleys of the Newmill Creek (to Little Wenham), the Brett (to Hitcham and Thorpe Morieux), the Brad (to Lavenham), the Box (to Edwardstone), the Chad Brook (to Brockley) and the Glem (to Wickhambrook)

The valley of the lower Gipping from Sproughton upstream to the southern edge of Needham Market, and those of its western tributaries: the Belstead Brook (including the Spring and Flowton Brook, to Elmsett) and The Channel (to Great Bricett)

These landscapes occur on the sides of the valleys that cut through the thick layer of chalky till deposited by the retreating icesheet of the Anglian Glaciation. Chalk underlies the whole area, but there are only a few places where it outcrops on the valley sides, as at Great Blakenham or Ballingdon, near Sudbury, where there are disused 19th century chalk pits and lime kilns. The valleys themselves are filled with gravel, sand and silt deposits left by torrential glacial meltwaters. At Little Cornard, south of Sudbury, clay laid down in meltwater lakes at the beginning of the Hoxnian interglacial were exploited in the 19th and 20th centuries for making white bricks. Basal deposits of ‘Lower London Tertiaries’ were also used for making red bricks while London Clay deposits are used for the Bulmer Brickworks.

Topography is mainly formed by the sloping valley sides, usually relatively gentle, but sometimes with surprisingly complex and steep slopes, as at Shelley in the Brett valley. The soils are mainly well-drained deep loams of the Ludford series, overlying glaciofluvial drift. In places there are patches of the heavier Melford loams, while on the upper slopes and in the upper valleys there are deep clay soils of the Hanslope series. All have a good arable potential.

This landscape has small and medium sized fields on the valley sides with an organic form which was created by the piecemeal enclosure of common arable and pasture lands. There was also parliamentary enclosure that included some common arable at Haverhill (1853 and 1857), Kedington (1853) and at Cornard (1813), which created areas of more regimented and systematic field patterns. As with the other valley side landscapes the field size tends to increase on the upper sides and plateaux edges of these valleys. The overall impression in the landscape is of sinuous and organic boundaries around the anciently enclosed fields. There are only limited areas of common arable fields enclosed systematically.

The easily worked soils were exploited for farming rather than the creation of parkland, Tendring Park at Stoke by Nayland is one of the more significant exceptions. Moderate-sized parks also exist at Denston and Boxted in the Glem valley, Chadacre in the Chad valley, Gifford’s Hall, Polstead and Chelsworth in the Brett valley, and formerly at Bramford and Sproughton in the Gipping valley.

There has been little in the way of common pasture in this landscape because of the quality of the soils and now only small “village” greens such as at Long Melford tend to remain. Where common pasture existed at all it was found in valley floor locations such as at Little Blakenham but historically any other reference to commons in this landscape usually refers to former common arable land, such as Kedington Common, Southfield Common and Welchmere Common as well as Baylham Common.

Overall the growth and development of villages and small towns in this landscape has been driven by the quality of the land and the agricultural prosperity that it brought. The area also benefits from the steepest and fastest flowing rivers in the county, an important and reliable source of power.

There is abundant evidence of early settlement in these river valleys: for example at Stratford St Mary on the Stour there is an important complex of cropmarks of Neolithic monuments; further cropmarks at Bures and numerous rings indicative of flattened Bronze Age burial mounds along the Stour valley and in the Brett and Gipping valleys. There were Roman villas at Capel St Mary, at Wixoe in the upper Stour valley, and at Hadleigh in the Brett valley. At the aptly named Blood Hill at Bramford in the Gipping valley two Bronze Age burials were found in 2006 beside three Roman graves, one of which contained a murdered woman and her two children dating from the time of civil unrest and Saxon raids in the late Roman period (c.AD 350-80).

Clare was one of the early centres of Suffolk’s medieval wool trade and that trade was responsible for the growth of many towns and villages in the Stour valley and its tributaries. Their medieval and Tudor prosperity shows in their exceptionally rich heritage of fine timber-framed houses and magnificent churches – the latter often termed ‘wool churches’ in recognition of the industry that paid for them. Hadleigh, in the Brett valley, was a royal residence (villa regia) in AD 890 when the Viking king, Guthrum, was buried there. It was later given by Ealdorman Brithnoth of Essex to Canterbury Cathedral and the cathedral priory continued to be the lords of Hadleigh through the Middle Ages. Lavenham, in the upper Brett valley, was granted a market in 1257 and was Suffolk’s leading wool town in the late 15th and early 16th centuries, and the 15th wealthiest town in England. The centres of all these towns and villages have retained their much of their mediaeval structure, and the majority of expansion and change has occurred on the periphery. The exception to this is Hadleigh where there has been, more change in later periods as the town continued to be more economically active than places such as Lavenham or Bildeston.

Hall and church complexes that did not expand into large settlements abound in these landscapes, often architecturally significant and frequently visually stunning, for example at Wissington, on the Stour; at Polstead, on the Box; and at Little Wenham, on the uppers waters of the Newmill Creek.

There is a preponderance of former manorial halls, many of which show their status by being moated, for example at Brockley, on the Chad Brook; Smallbridge Hall, the Tudor brick mansion of the Waldegrave family at Bures on the Stour; and Shelley Hall in the Brett valley. Not moated, but with an imposing brick gatehouse giving access to an enclosed courtyard, Gifford’s Hall in Stoke-by-Nayland was described by Pevsner as ‘one of the loveliest houses of its date in England’.

Past industrial land uses are evident in many ways, some surviving in part, others long gone: the numerous flour or fulling watermills that lined these valleys, including the iconic Flatford Mill in East Bergholt that was painted by John Constable; the former Ballingdon Grove Works, where a grouping of 19th-century chalk pits, lime kilns, a maltings and a brickworks were linked by the Ballingdon Cut to the Stour; the late-19th-century xylonite works at Brantham;  several chalk pits in Great and Little Blakenham, Baylham and Barking; and a cement works beside the railway at Great Blakenham, drawing on the local resources of chalk and clay.

Ancient woodland is mainly confined to the upper slopes of the valleys and is mostly in relatively small parcels. Three significant large woods partly in this landscape are the adjacent Lineage Wood and Spelthorn Wood in Long Melford (both recorded by name from the 14th century), and Middle Wood in Offton.

At Polstead, the decaying remains of its famous Gospel Oak lie between the church and the Hall. Reputed to have been the oldest living in Suffolk, it collapsed in 1953. Polstead was also reputed for its cherries (Polstead Blacks) by the early 19thC, few cherry orchards now remain, though they are still commemorated in local place-names: Cherrytree Farm, Cherry Billy’s Lane and Cherry Meadow.

This is a rich and varied landscape with it’s concentration of prosperous mediaeval towns and villages, contrasting with the smaller and less glamorous settlements of the surrounding plateaux. The steeper valleys and sunken lanes contrast clearly to most of the other valley networks in the county.

This landscape type embraces some of the most famous views and sites of Suffolk, East Anglia and England. The Stour valley is internationally renowned as ‘Constable Country’, being the inspiration for many of the landscape paintings of John Constable. The landscape has also inspired other artists, such as Thomas Gainsborough, Sir Alfred Munnings, Sir Cedric Morris and John Nash. This artistic legacy led to its designation as an Area of Outstanding Natural Beauty in 1970. The Constable-related complex at Flatford Mill features on many tourist itineraries, as do the timber-framed buildings of Lavenham, the monumental ‘wool churches’ and picturesque villages such as Cavendish, Kersey and Nayland.

Much of this landscape retains it historic patterns, of both the agricultural and built environment. However, the Gipping valley has been a focus of economic activity and as such has been subject to transport and industrial developments. Conversely the Stour and its tributaries have been subject to some gentrification, with significant changes in land use, such as the increase in horse pastures and the loss of much commercial orchard production. 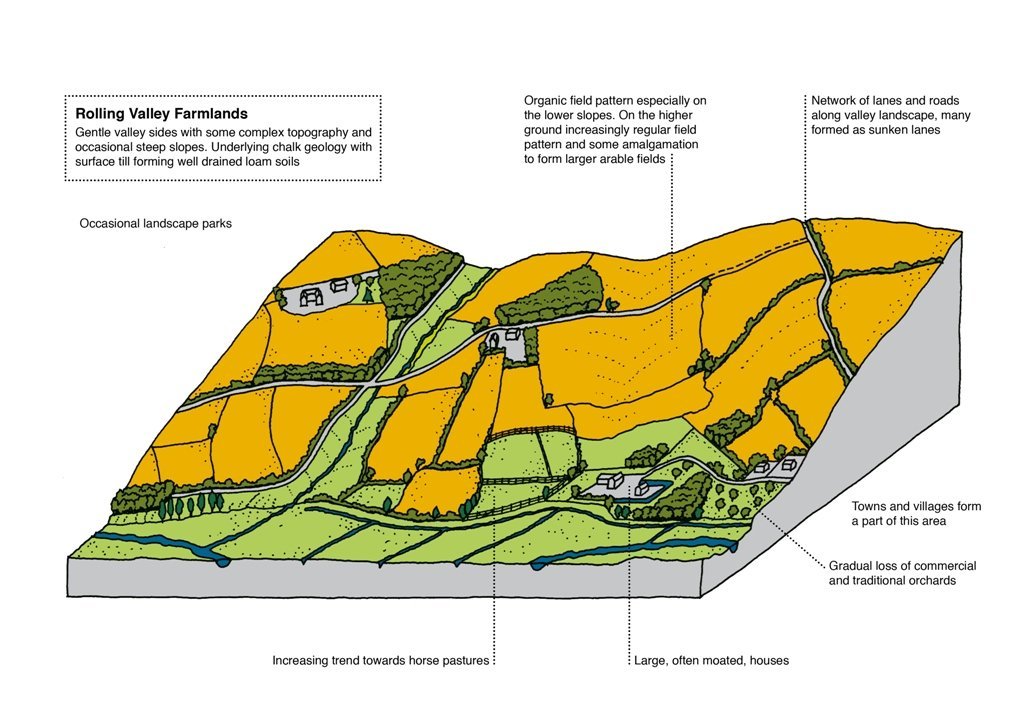