This is a landscape found between the Estate Sandlands and Settled Fenland landscape types. It is in three parts:
Mildenhall, West Row and Wilde Street
Undley Hards and Lakenheath.

The landscape consists of the chalk and gravel outcrops of Mildenhall and Lakenheath and a series of low chalk “islands” between them surrounded by fenland. Unlike the surrounding peat and alluvial fen soils the land is free draining.

In the south there is a small chalk plateau formerly occupied by the common fields of Mildenhall, before their enclosure in the 19th century. Along the west and north sides are a string of fen-edge hamlets or ‘rows’– West Row, Beck Row, Holywell Row – each formerly had numerous small or linear greens that now only survive as place-names (e.g. Thistley Green and Holmsey Green). Wilde Street sits on the edge of Littley Field – its former island status being reflected by the name ending in ‘(e)y, from Old English eg ‘an island’.

Undley is a largish island of chalk in this fen landscape, with Undley Hall in the centre and the former Undley Hards to the north and Undley Common to the south. Turf Fen is a tongue of settled fenland, (formerly Lakenheath Common), that separates Undley from the hards of Lakenheath. Lakenheath itself sits on the lower slopes of the chalky and sandy Maids Cross Hill.

Mildenhall Airfield, first opened in 1934, covers over 420 ha of this ancient farmland and dominates the northern half of the plateau. The main runway runs parallel to the former Old Way, a large cattle droveway that formerly led from the town of Mildenhall out though its fields to the fen edge. Outside the airbase the farmland now consists of straight-sided fields resulting from late enclosure, divided by minimal or no hedges. Some smallholding plot lands and market gardens are still apparent such as those at Thistley Green.

In all these areas, although the field pattern, with its organised and systematic structure is similar to the surrounding fens, the chalky soil means that the network of drainage ditches is absent.

Compared with the Estate Sandlands to the east and the Settled and Planned Fenlands to the west, this landscape is much more comprehensively settled with small farms, and hamlets form multiple nuclei. This pattern developed because the landscape was very attractive to early settlers, having better soils, between the dry sandy soils to the east and the fenland to the west.

Many of these small settlements have formed the basis for later expansion, driven, in large part, by the economic impetus created by the presence of the airbases. The result has been growth in the number of dwellings, especially bungalows.

There is little in the way of woodland in this landscape except for a scattering of tree belts and plantations. The area also includes Aspal Close, an ancient wood pasture that was once the small park or ‘home close’ of the small manor of Aspals (named after Sir Robert de Aspal, its early-14th century owner). Aspal Hall and most of its medieval moat has been lost to the expansion of Beck Row, which now surrounds the Close. On the southern side, another former manor, Wamill Hall, stands more isolated in the middle of its farmland. Its name, from Old English twaem hyllum  ‘two hills’, probably commemorates some former burial mounds on the plateau.

On the Mildenhall plateau, the overall feel is of an open plain dominated by the airfield with a few remnant and degraded rural features around it. However further away, especially at Wilde Street and Undley, there are long but well treed views, similar to those on the fenlands, but with a much busier and more populated feel.

Most of the area, especially the hamlets, have been reshaped by the physical and economic presence of the airbase. However, the settled landscape still has pockets smaller scale farming and quiet countryside along isolated tree lined droves. 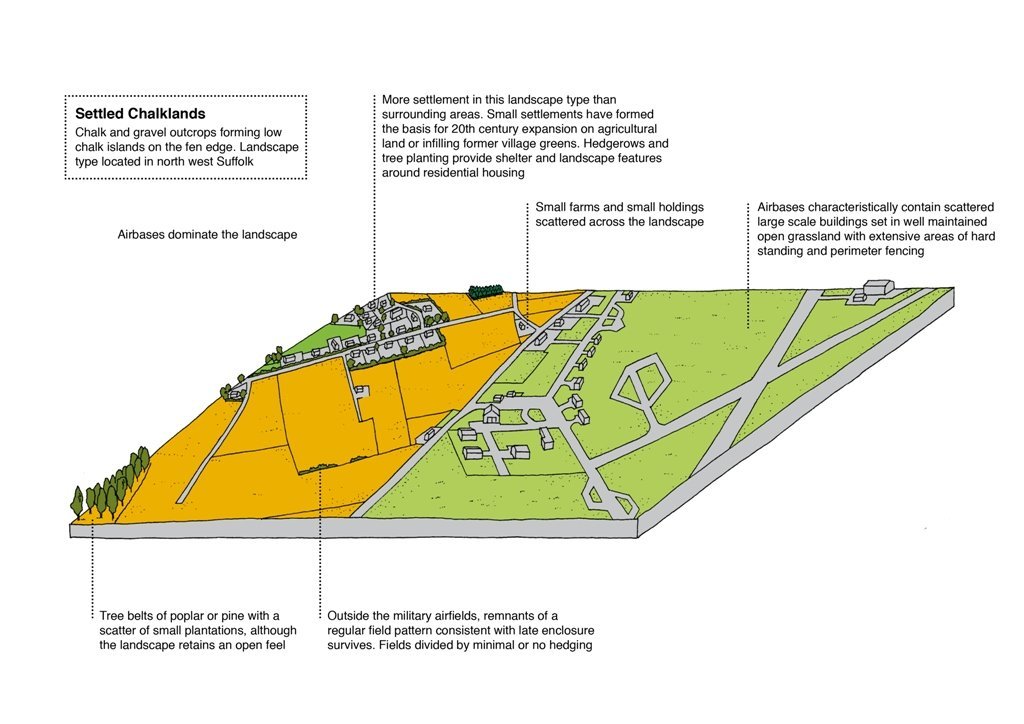