This landscape type is found in north-west Suffolk, extending northwards from the Beck Row area of Mildenhall to Kenny Hill in the north west at Wangford Fen and westward to the River Lark and beyond the county boundary. It also occurs at the extreme northern end of Exning.

The area has an underlying micro-topography of sandy hummocks and peat-filled hollows, covered by a desiccating surface peat layer that gives the area the appearance of a flat, black, plain. Most of the land is at sea level, but small sandy islands and ridges may rise to about 4m above sea level. The black peaty soils vary from very sandy where underlying sand ridges are close to the surface, to almost pure peat over the deeper hollows.

A large part of the area is taken up by Mildenhall Fen, formerly Mildenhall Common Fen. This was originally an extensive and open fen common belonging to the inhabitants of Mildenhall and had experienced some piecemeal enclosure before the implementation of a Drainage Act of 1759. The area was delimited by the ‘uplands’ or ‘hards’ (i.e the dry land) of Mildenhall to the south and east, and an old sinuous watercourse called Baldwin’s Lode to the north. A flood-control bank, called the Cross Bank, was added after 1759, on the north side of this drain. The drainage works have resulted in a landscape of relatively small, narrow fields that are divided by straight, water-filled drains, with long axes that lie mainly at right angles to the former cattle drove roads radiating out from the Mildenhall ‘hards’. The land was allotted in relatively small parcels, so that there are frequent changes of ownership across small groups of fields. Agriculture was, and remains, more varied here than in the ‘planned fenlands’ to the north of Baldwin’s Lode, with the remnants of smallholding livestock production and the glasshouse production of salad crops, as well as a scattering of old orchards. A lot of the land in this area is still rented from the county council and this has maintained the pattern of small land holdings.

The Cut-Off Channel is a large drain that forms a prominent landscape feature on the eastern edge of this area. Constructed between 1960-4, it runs some 27 miles from the River Lark at Barton Mills north to Denver. It intercepts the waters of the Lark, Little Ouse and Wissey and carries them directly to the complex of sluices at Denver.

There are no real villages in this landscape but a series of small hamlets or clusters of farms such as Kenny Hill. Settlement clusters are usually linked to the settled chalkland landscape of the larger of the fen ‘islands’, such as Undley, and Wilde Street on the edge of Littley Field – their former island status being reflected by names ending in ‘(e)y, from Old English eg ‘an island’. There are also intermittent strings of farmsteads along the drove roads, mainly in the fen ‘skirtlands’ around the edges of the permanent hards.

Small plantations of poplar and conifer belts occur sporadically in the western part of this area, but are more common in the east, with blocks of considerable size on the eastern margin at Wilde Street and along the Cut-Off Channel.

The pattern of smallish fields and numerous farmsteads give a more ‘lived in’ feel to this landscape, which contrasts with the larger-scale fields and more isolated farmsteads of the planned fenlands to north, although the difference may not be obvious unless both landscapes are visited.

The array of small farms, with business parks and a golf course mixed in, as well as caravan sites, gives the droves and hamlets a busy air, which contrasts with the openness and isolation of the deeper fen areas. There are also greater development pressures and settlement expansion breaking down the pattern of plotlands and backyard farming. 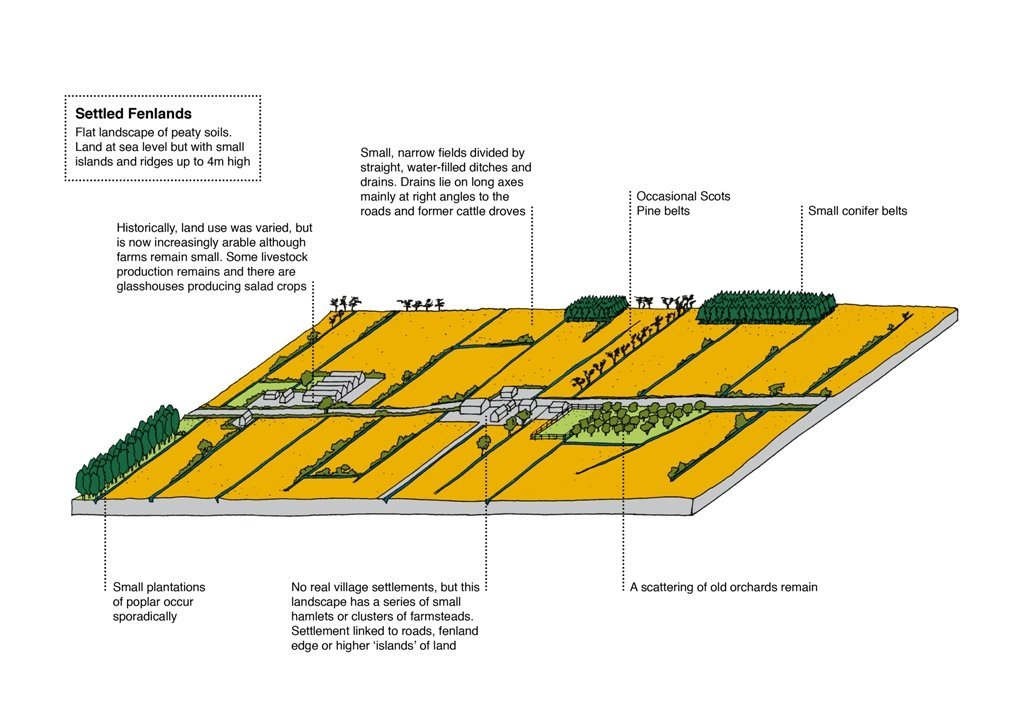