A landscape of open undulating farmland with blocks of ancient woodland

This landscape type only occurs in one place, which is an area of clay ‘upland’ bordering the Stour and Glem rivers in south-west Suffolk. The area lies between Clare and Cowlinge in the west and Shimpling and Lawshall in the east, extending northwards as far as Chedburgh.

Depden, in the northern part of this area, at 128m OD, is the highest point in Suffolk. The elevated plateau of chalky clay till laid down by the Anglian glaciation is, however, much dissected by small valleys, giving a markedly undulating landscape with some quite steep slopes. The sloping land, combined with the high chalk content of the glacial till, has created a large area of clay soils of the Hanslope series that are good for arable farming, (in contrast to the more difficult to cultivate Beccles series found on the clay plateau of High Suffolk).

This is predominantly an area of ‘ancient enclosure’, with an irregular pattern of fields bounded by large, long-established hedges. There are a few localised patches of more regular fields in areas like Hundon where three large medieval deer parks were enclosed in the post-medieval period. The construction of WWII military airfields at Chedburgh and at Stradishall has also affected the historic field patterns.

The settlement pattern is one of dispersed farmsteads and hamlets, scattered between moderately sized green-edge settlements. Some of the greens are well preserved, as at Depden, but many of the others were enclosed or in-filled with housing in the 18th and 19th centuries, as at Lawshall and Chedburgh, and survive only as names. There are only occasional larger villages, as at Wickhambrook, Chedburgh or Glemsford.

There is a rich stock of medieval and Tudor timber-framed and brick buildings, some of which lie within moated sites, eg Depden Hall and Giffords Hall in Wickhambrook, or on the green edges, as is the case of the important mid-13th century house at Purton Green in Stansfield.

The utilisation of parts of the former airfield at Chedburgh for industrial units has had a noticeable affect on the landscape, as has the use of the Stradishall airfield, on the edge of this landscape, for a prison. Large agricultural buildings are a recurring feature, often associated with non-native screening trees such as poplar.

The area is well stocked with ancient woods of moderate size, usually situated on the tops of the more poorly drained clay hills. The long-enclosed nature of the landscape has helped to preserve the woods by excluding the grazing livestock that would otherwise have diminished the resource.

In general there are long open views across this undulating landscape in which trees, either in hedges or in woods, are always a prominent feature. This is in direct contrast with the plateau claylands of High Suffolk where the views, although open, are of gently rolling farmland on which woodland is almost entirely absent.

There are a few areas where woodland is more clustered and the effects of agricultural rationalisation are not so apparent, such as the view to the south-west from Whepstead. Here the landscape feels smaller and is confined by woods and hedges.

The historic pattern of field boundaries has been degraded through 20th century agricultural rationalisation that has resulted in a large number of hedges being removed, as at Rede or Mickley Green. Furthermore, inappropriate tree planting on greens has also had an adverse effect on the character of the historic landscape. However, despite these changes the landscape maintains much of its historic character. 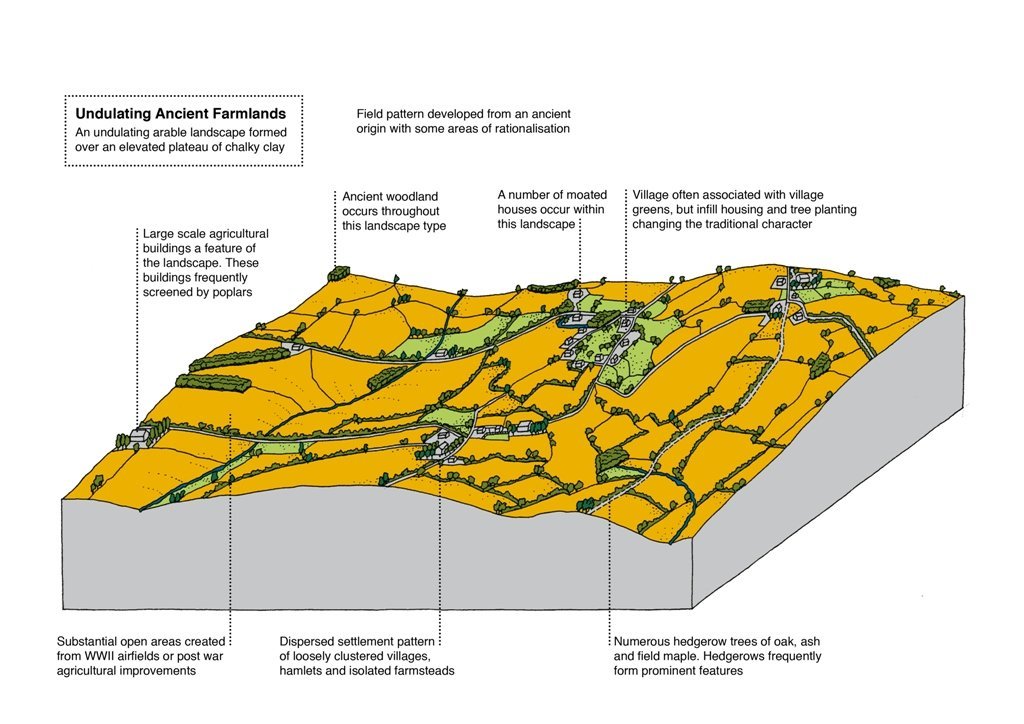