This landscape type occurs in two main areas of the county:

In the north-east in the east-flowing valleys of the Hundred River (Rushmere to Ellough), the Wang (Wolsey Bridge to Uggeshall), the Blyth (Bulcamp to Heveningham and along a tributary to Bramfield), and the Minsmere River or Yox (Eastbridge to Sibton).

These landscapes comprise flat, narrow, river valley bottoms, those in the east having deep peat deposits, except in the higher reaches the Yox and the Hundred River. In the west, deep peat is limited to parts of the Lark, with mixtures of peat and sandy deposits elsewhere. Occasionally there are ancient meres within the valley bottoms, for example at Micklemere in Pakenham, and at Livermere.

The common pattern of land division in this landscape is into small grassland fields, bounded by dykes running at right angles to the main river. This valley grassland usually forms part of a larger agricultural holding, where it is generally marginal to the principal farming business. In many cases the small fields have been turned over to the production of arable crops. In places where the land is quite dry, such as on the Yox around Sibton, this change has been sustained. In a lot of cases, such as at Norton on the Black Bourne, efforts at arable production have been replaced by set-aside or managed as grassland under a government environment grant scheme.

These valleys are all found in a wider estate type landscape; therefore they often incorporate parts of parklands. The most notable examples of this are at Heveningham, where the large lakes designed by Capability Brown in the 1780s were completed in the 1990s; at Ampton/Great Livermere, where in the 1790’s Humphry Repton designed a long lake to serve two parks; and at Culford where he again designed a long lake. Parklands are also found at Pakenham, Euston, Stowlangtoft and Sibton.

Settlements adjacent to this landscape tend to reflect the surrounding estate character. However the valley floors themselves are largely unsettled, except for the occasional farmstead.

There is some tree cover present here in the form of alder carrs and plantation woodlands, however trees and woodland do not dominate the landscape to the same extent as in the valleys of the Waveney and the Little Ouse. The important fen sites remaining in this landscape are at Pakenham and Tuddenham in the west of the county.

This landscape is noticeably contained by the surrounding higher land. There are only occasional exceptions to this, such as at Wenhaston and Blyford on the Blyth. Here the landscape can give the same sense of quiet isolation that is experienced on the floor of the Waveney valley. However, landscape change and human activity tend to intrude more often, for example arable land at Sibton, parklands such as Heveningham, or pony paddocks at Tostock.

Some parts of this landscape are still in fine condition and retain a rural feel. This is mostly due to the retention of the traditional management of cattle grazing, a pattern shown at its best at Blyford. However, there is also a lot of neglect and poor management in these landscapes. The difficult access to small fields results in them often being peripheral to any form of active agriculture and so they are tending to be lost to scrub encroachment, tree planting and horse paddocks. 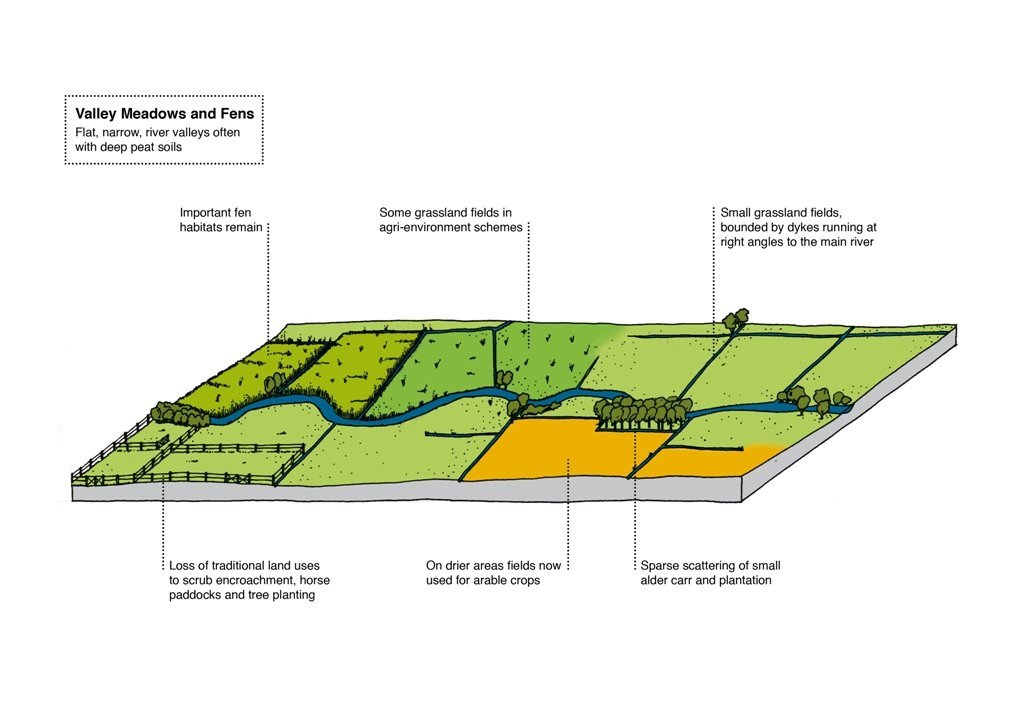