This landscape character type is found in two parts of the county:

In some coastal valleys at Benacre, Covehithe and Reydon/South Cove upstream to Frostenden.
The Hurst Fen area on the north-east side of Mildenhall in north-west Suffolk.

The coastal areas consist of flat valley bottoms covered with deep peat deposits and alluvium, and in some places contain extensive bodies of water, eg Benacre Broad, Covehithe Broad and Easton Broad. The area in the north-west has sandier soils with more variable peat deposits.

The enclosure pattern, where one is present, consists mainly of straight drainage ditches, indicative of 18th- or 19th-century enclosure and drainage. However, the coastal valleys also have some more curvilinear drains that suggest earlier episodes of enclosure – as in Pottersbridge and Smear Marshes. Some of the areas on the coast have been reverted to unenclosed ‘wildland’ for wildlife conservation. In the north-west, the area is bounded on the east by the Cut-Off Channel – constructed 1960-4, it runs some 27 miles from the River Lark at Barton Mills north to Denver. It intercepts the waters of the Lark, Little Ouse and Wissey and carries them directly to the complex of sluices at Denver.

These are generally unsettled areas with farmsteads present on the surrounding higher ground. The only exception is the Mildenhall area where there are some farmsteads on locally higher pieces of ground – this continues a long tradition, for an important Neolithic settlement was excavated in the 1950s in part of Hurst Fen.

The coastal valleys consist largely of grazing marsh or reverted ‘wildland’ for nature conservation, with considerable amounts of water, either in drainage ditches or larger open broads. There are fragmented areas of alder carr within the valleys and larger amounts of plantation woodlands on the higher ground surrounding them. The Hurst Fen area of Mildenhall has been partly reclaimed as arable farmland and is surrounded by extensive plantations.

Principally these are open flat landscapes framed by woodland on the rising ground around them. The presence of grazing animals makes a significant contribution to the landscape, particularly on the coast.

Generally in excellent condition and in most cases maintained for conservation purposes. However, the Mildenhall area is dominated by forestry and affected by the Cut-off Channel and a trunk road. 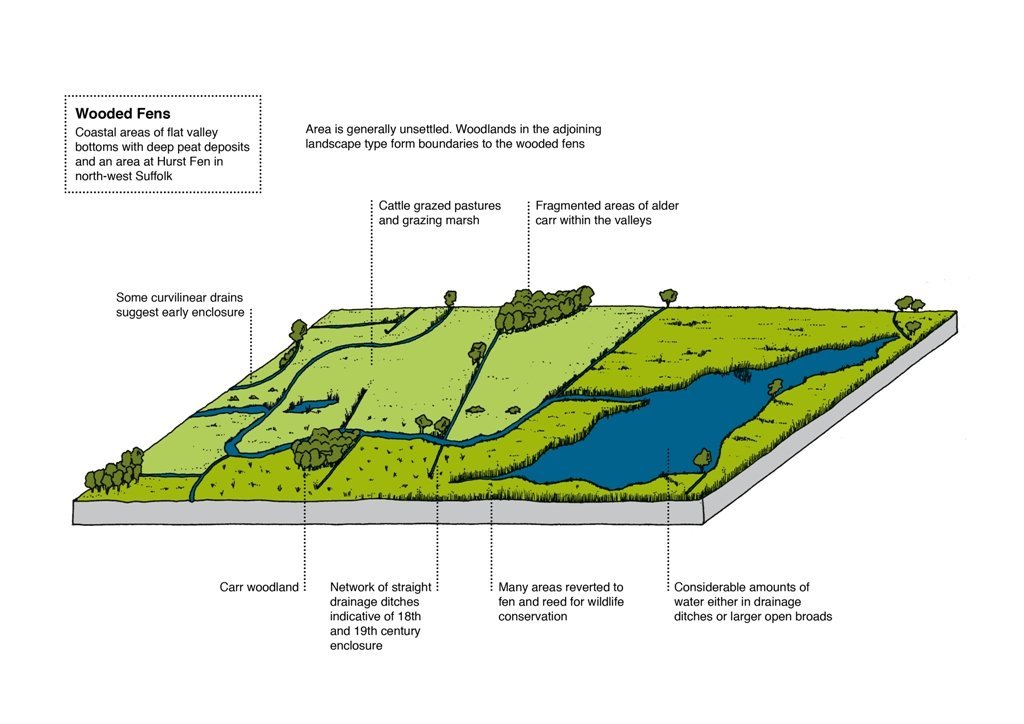