This landscape type is only found in two interlinked river valleys on the northern boundary of the county:

The valley of the Waveney westwards from the Coastal Levels at Barnby, taking in part of Holborn Marsh in Barnby and Carlton Colville, Barnby Broad and Old Broad, Benstead Marshes in Mettingham, Shipmeadow Marshes, Barsham Marshes, Beccles Marshes and Common, Outney Common and Stow Fen in Bungay, Limbourne Common and Mendham Marshes, part of Stuston Common and ending in Redgrave and Lopham Fen; together with the valleys of some of the Waveney’s tributaries, notably the River Dove southward to Eye (its name, in Old English, means ‘an island;’ and this landscape type does almost surround the town) and Wetheringsett.

The Little Ouse from its source in Redgrave and Lopham Fen westward to its junction with the Settled Fenland landscape at Brandon, taking in Hinderclay Fen, Thelnetham Fen, Raydon Common in Hopton and Hopton Common, and including some tributary valleys such as that at Botesdale with Hopton and Weston Fens and the serpentine lake of Redgrave Park.

The Little Ouse and Waveney valleys are both part of the same topographical formation, but with a drainage flow which changes from east (the Waveney) to west (the Little Ouse) at Redgrave and Lopham Fen. The whole valley system was formed by glacial outwash at the end of the great Anglian Glaciation but parts of it, particularly of the Waveney, seem to overlie deposits associated with a pre-Anglian river known to geologists as the Bytham River.

The flat valley bottom has a history of poor drainage leading to the deposition of extensive peat deposits. In the Waveney valley these deep bands of river valley peat are generally narrow from Redgrave to Mendham, but broaden out from there to Barnby. In the Little Ouse valley peat is still present but there is a great deal more sand and the soil is similar to that of much of the Settled Fenland landscape. On the side valleys of the Waveney, such as the Dove, waterlogged clays often replace peat deposits.

In places, particularly in the Waveney valley around Mendham, the flat valley floors are flanked by quite high and steep slopes, giving an enclosed feeling that is rare in the generally very open East Anglian landscape.

The dominant use of these damp valley floor landscapes was animal pasture, with the un-drainable areas left as fens or marshes, or utilised as wet woodland or alder carrs. The landscape is frequently divided by sinuous boundaries, with short lengths of straight drains at right angles to the rivers or creeks. In some places, such as at Hopton Common, large riverside commons have been enclosed and subdivided into geometric units. The wider valley floor to the east of Bungay has a stronger and more extensive pattern of straight drains, often resulting in numerous parallel narrow fields.

Improvements in drainage techniques and economic incentives led many of the pastures to be converted to arable in the 20th century, but some have since been reverted back to pasture using government funded environment schemes. Where wet conditions prevail, pastures have frequently been converted to, or allowed to be colonised by, woodland.

There are still some important semi-wild fens in this landscape – from the best known at Redgrave/Lopham and Thelnetham to the smaller ones such as The Marsh at Thrandeston and Thorndon Fen.

The pastures of the valley largely belong to farms that are situated on the higher and drier land surrounding the valley floors. There are, however, a few examples of substantial farmsteads of medieval origin that have colonised locally higher ‘islands’ or fringes within the valleys, as at Santon House (and church) and Blo’ Norton Hall on the Little Ouse, and Frenze Hall (and church), Wortwell Hall, Barsham Hall, and Roos Hall in Beccles on the Waveney and its tributaries.

One of the few larger settlements actually within the valley is the village of Mendham, which has a medieval church that is probably the successor to a ‘minster’ or monastic church mentioned in the mid 10th century. Mendham Priory was founded nearby on ‘St Mary’s Isle’ in the 12th century but only a few stumps of masonry survive on a raised area in Mendham Marshes. Syleham and Rushford churches also occupy isolated positions in the valleys. Several other churches have positions close to or on the landscape boundary: Santon Downham, Thetford St Mary, Barnham, Coney Weston, Knettishall, Blo’ Norton, Thelnetham, Bressingham, Rickinghall Inferior, Denton, Earsham, and Ellingham

The towns of Bungay and Beccles occupy peninsulas in the Waveney valley and the town of Eye sits on a large semi-island within the Dove valley.

The peaty or wet sandy soils in these valleys mean that the cover of trees and wet woodland is an important component of the landscape. Small poplar or cricket bat willow plantations and areas of naturally regenerating alder carr are common throughout, but are particularly noticeable in the narrower valleys to the west of Mendham. From Mendham Marshes eastward, the main valley is wider and woodland cover is more limited to the edges. From Thetford westward, the valley runs through 20th century pine plantations.

Despite the fact that the edges of this landscape are often formed by main roads or urban fringe, such as at Beccles, overall the impression is of a quiet hidden landscape, usually undisturbed by the human activity taking place to the north and the south.

This landscape is generally in good condition, with a lot of conservation effort being placed on the key fen sites. However the visual condition is threatened in places by the conversion of traditional grazing into pony paddocks with their associated field shelters and fencing tape, rather than the more robust and discreet methods used for cattle. There has also been a certain amount of mineral extraction in the Waveney valley in the 20th century that has left a legacy of large lakes, as at Weybread, Wortwell, Earsham and Ditchingham. There has also been some extraction in some of the tributary valleys of the Little Ouse, such as at Hinderclay. 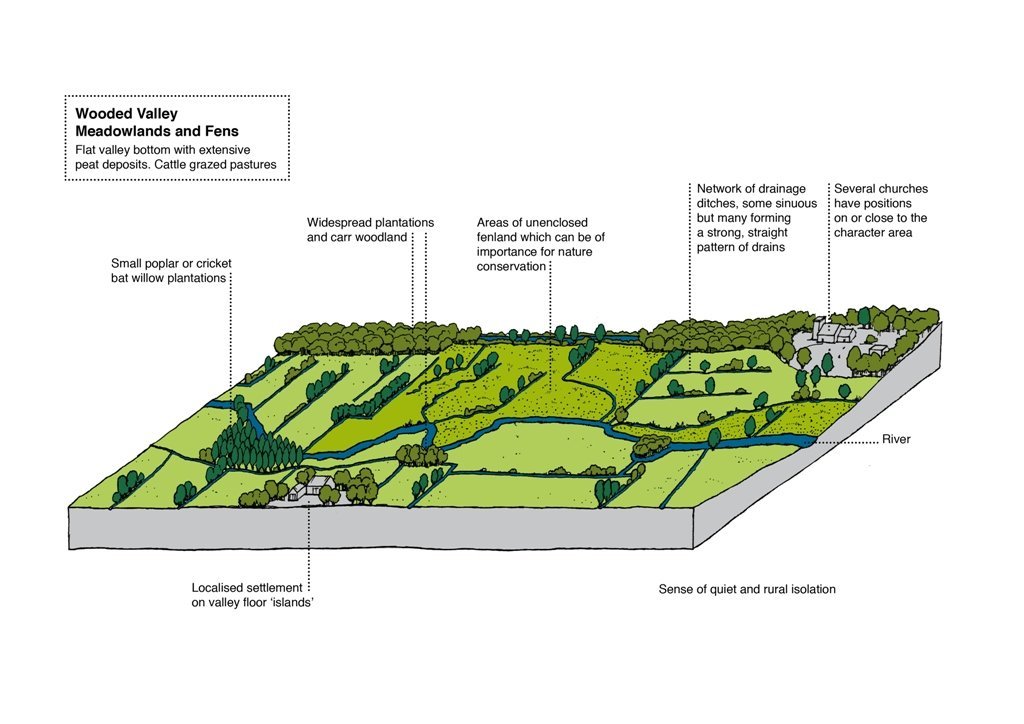 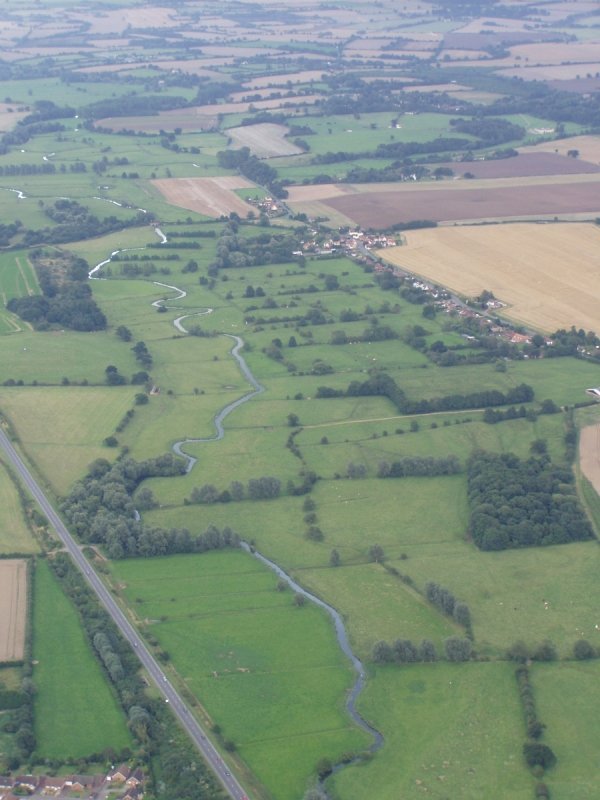 The valley floor between Scole and Oakley Park 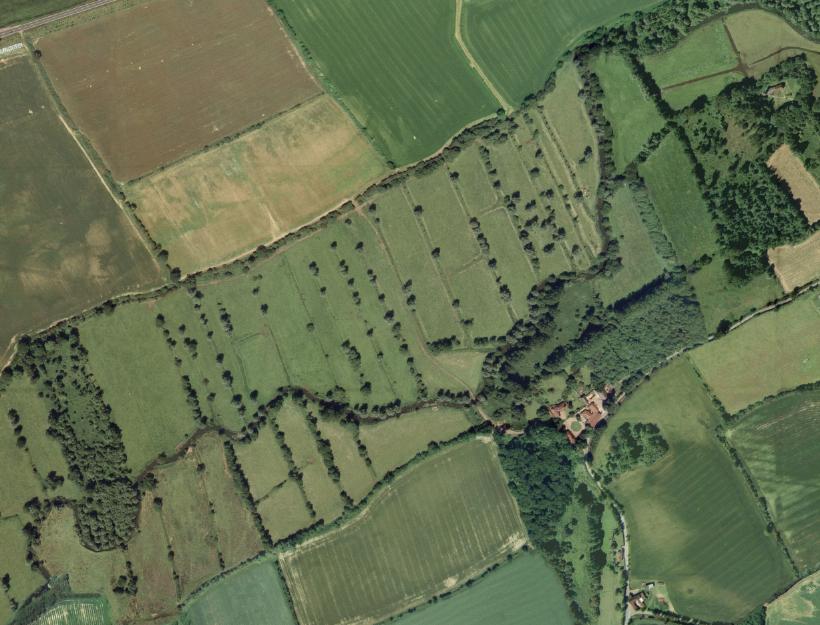 The Waveney valley at Sylham 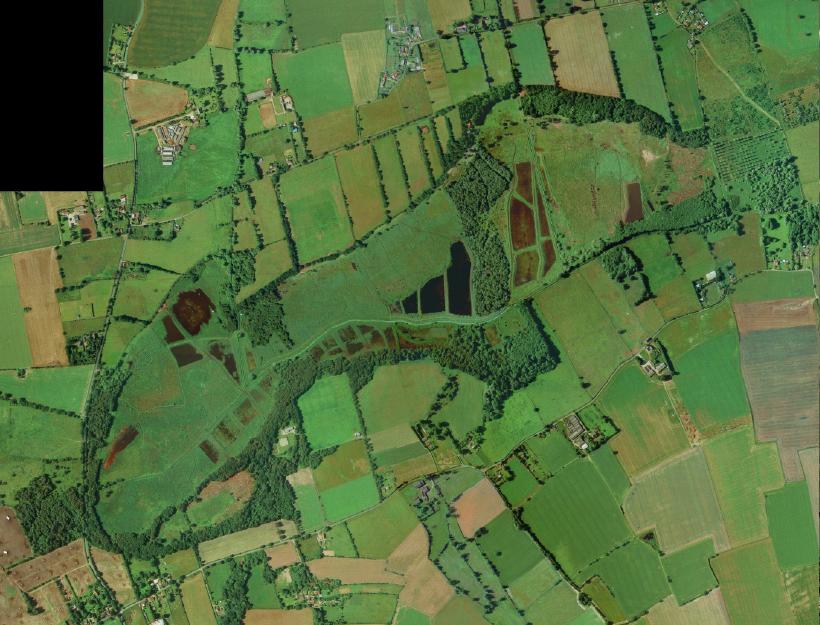